The Met Office has given an update on when the mini-heatwave over the weekend is due to end.

Predictions from the forecaster said the UK could enjoy its hottest day of the year this weekend, with temperatures due to hit a balmy 18 to 20 degrees.

The summery stint is caused by a huge band of high pressure carrying with it a pocket of air from North Africa, keeping conditions appealing for those looking to shake off their winter layers for a day or two.

Met Office meteorologist Clare Nasir said: "Generally the weekend is looking fine and dry, much warmer with some sunshine.

"High pressure reaching across Denmark will allow for settled conditions to extend right across the UK, but some stronger winds on Saturday certainly.

“Gusts over the hills and moors as well as the mountains, but with a southerly wind it will feel very warm across some parts, particularly I would say the Moray Firth where we could see an 18C."

But enjoy the good times while they last, because before you know it the summer in spring will come to an end, with the British Isles set to return to slightly more seasonal weather. 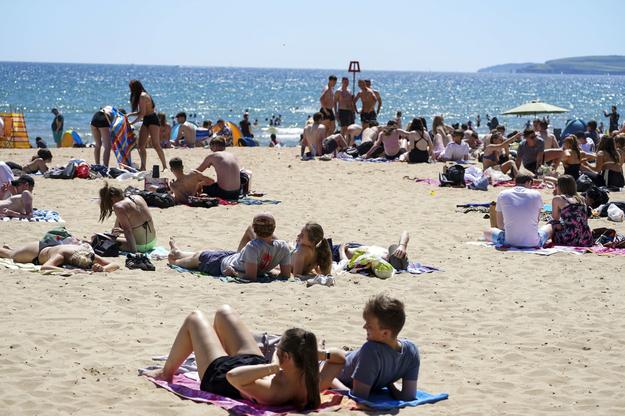 The mini-heatwave is due to end on Sunday March 20, so lap up those rays while you have the chance.

The Met Office has published an overview of the weather expected over the weekend. It says: "Chance of rain, most likely in the east, from Sunday. Turning colder through Sunday."

To make things worse, when this little sunspot passes, it will be a while until we get another.

The Met Office long-range forecast from Tuesday says: “There is likely to be variable cloud cover, most extensive in the south with the chance of some patchy light rain.

"Temperatures likely to be around normal, after a cold start."

But don’t let this get you down - the weekend ahead looks fantastic, with temperatures well above the average.

While you sun yourself in the glory of 20-degree heat, remember that the average temperature for March is only 10C.

Describing Saturday’s weather, the Met Office added: “Fine, dry and bright with plenty of sunshine, but also windy, especially in the south and west. Feeling pleasantly warm in the sunshine out of the wind.”