Nothing, it seems, was going to stop Paralympian Stef Reid ­starring in Dancing on Ice. Wearing a prosthetic leg from the knee down? Of course not.

Having a new leg – her seventh, she has three for running and even one for high heels – engineered at speed for the show that needed to be completely rigid, throwing her body off balance? No chance. Although early on, it came close, she concedes.

That ice skating caused the freak ­accident which left her husband, the Canadian wheelchair racing athlete Brent Lakatos, paralysed? Surely this must have prompted both of them to seriously consider the danger Stef would be placing herself in when she joined this year’s series of the ITV show.

It simply didn’t, she smiles, all white teeth, shiny eyes and go-getting fizz.

“He did kind of roll his eyes and say, ‘Stefanie, you’re nuts’, but he kind of thought that anyway,” she recalls. “‘But that’s also why I fell in love with you because you’re ridiculous and think you can do anything – good on you, go for it’,” he told her.

It is hard to imagine the video clip didn’t cause Brent to draw a sharp breath. Now 41, he was six when he fell while playing ice hockey, the impact causing a blood clot to form on his spine, which led to paralysis. “He was lucky to survive,” Stef explained.

But if watching Stef plunge was terrifying, he hasn’t shown her his nerves.

“He watches all my lifts. He’ll tell me straight, and he said, ‘You did really well’. He said I skate better than he thought I would,” she laughs.

This week eyes will certainly water. The long-jumper and sprinter, who has won bronze and silver Paralympic medals, says she will be skating a Dirty Dancing routine for movie week – and she will be attempting THE lift.

If you haven’t caught on yet, no one puts Stef in the corner.

Although on Wednesday, when we spoke, they hadn’t conquered that overhead lift on ice yet.

“Yes, skating is dangerous, but we do a lot of things in life that are dangerous,” she says. “The lift Andy and I did when I fell, for us it was low risk, we could do it with no mistakes, but it was high stakes, it can go badly.

“Like taking a plane. We are constantly making assessments in our lives. If you live constantly thinking of the worst case scenario I guess you won’t live.”

She and Brent share this perspective because they came close to losing their lives doing activities few would have considered risky.

Like Brent, life dealt Stef cards that no risk analyst would have foreseen. Hers was also a freak accident at a young age.

She was 15 when she was involved in a boating accident in a lake in Canada. She and her British parents moved to the country when she was four.

The sports-mad teen, who wanted to be a rugby star, flew off an inflatable ring being pulled by a boat, which then didn’t see her. As it came towards her she tried to dive ­underwater. When she ­resurfaced she was in a pool of blood. 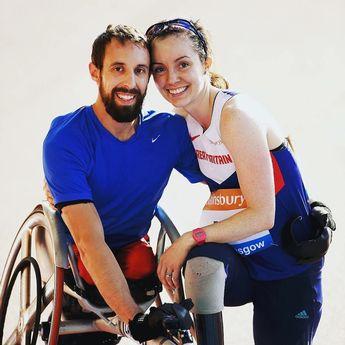 “I couldn’t feel any pain,” she said. “Then I noticed the water around me was red. Although I couldn’t see my ­injuries below the water, the propeller had caught me across my right leg, my glutes and lower back.

“I didn’t know it, but it had almost cut me in half. I had no feeling in my right foot and I thought I was going to die.”

A surgeon saved her life by amputating her right leg below the knee.

“There were periods of wild anger and temper tantrums, and you’re in pain,” she admits of her recovery. “It was so, so difficult. I was so thankful to still be alive, because I knew how close it was, but so angry.

“Eventually what I realised was I could have lost every limb and I would have been the same person, I was still me. I was still someone who loved to work hard and loved competition and I needed to find a new outlet for that,” she says.

That outlet was sport, and Stef has since won bronze in the 200m at the 2008 Paralympics, and silver in the long jump at London 2012. But she and Brent, a World Championship gold and Paralympic silver medalwinning racer, who she married in 2008, still face discrimination, she says.

“Brent uses a wheelchair, his disability is obvious whereas if I’m wearing trousers you probably can’t tell.

“When we go out to a restaurant there have been ­occasions when Brent made the booking yet the bill comes to me. It’s almost this weird assumption that someone with a disability can’t handle a bill.

“Then one of my favourite moments was I was in a grocery store and I was wearing shorts and a mum said to her five-year-old daughter, ‘Don’t stare, sweetie, she has a poorly leg’.

“I listened to see what the girl would say, and she thought and said, ‘No she doesn’t, she has a robot leg,’ and carried on. How brilliant.”

Ever smiling, Stef says of course it is frustrating, but she also knows ­generally not intentional.

“It’s hard not to get angry, but I was that person before my accident. I didn’t know anything about ­disability, I was ­probably as ­prejudiced,” she says. “People care, but if you’re not exposed or don’t understand, it’s hard to relate. Even now, I’ll plan a day with my husband and forget to check if the place is accessible.

“Fortunately I’m quite strong so if there’s a few stairs I can usually help, and Brent is an athlete,” she laughs.

Thanks to the increased prominence of disability on TV, there is a shift. She saw it begin after London 2012, when she was asked to model for Vogue, and appear on the London Fashion Week catwalk.

“It really matters because it sets a tone for what society thinks of as normal,” she says.

And normal is how she wants to be treated by the judges. When Chris Dean told her she needed to skate faster last week, she appreciated it.

“I want to be treated as an equal. I’m glad they challenged me, it was a sign of respect,” she nods.

As for Baby’s lift? “My confidence and ambition outweighs my technical skill at the moment!” she giggles.

But Stef is having the time of her life. You suspect she usually does.