A man is convinced he has spotted a UFO flying above the Arctic ocean on Google Earth.

Office manager Edward Jones was confused when he spotted the mysterious figure hovering off the coast of the Norwegian archipelago of Svalbard.

He claims to have spotted UFOs in the past, and shared his finding on Facebook - but other users weren't so convinced.

People made all sorts of weird and wonderful claims as to what the shadowy shape was, including that it was Jesus, Michael Jackson, a Star Wars spaceship or even a passing seagull.

Edward believes it's none of these options, claiming that it doesn't look "from this earth".

He said: "When I'm bored, I'll go on Google Earth, and look around at different locations that you're never going to see [in real life].

"I was just being nosey and I was having a look up around Greenland and the Arctic.

"One of the shots was on a boat and I spotted it when I zoomed in. It didn't look like anything I'd ever seen and I couldn't understand what it was in the middle of the sea.

"I'm a big believer in UFOs, I've seen a few with my own eyes.

"I couldn't say what it is. The way it's flying, it's sort of vertical, not horizontal like a plane."

But Edward's post was greeted with a lot of skepticism.

He explained: "There's quite a few non-believers in the group. I put it up and people started saying all sorts.

"I don't know why non-believers are in that group if they're just going to slate everything.

"I know what I saw and it wasn't a seagull, I never saw a seagull that looked like that. 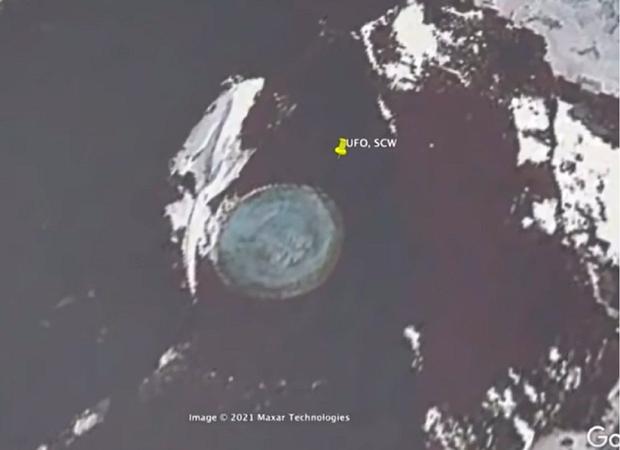 "It's just something I can't identify, so I'd classify it as a UFO.

"Personally I think if aliens were to be anywhere on the planet, they'd be up around places like Greenland or Antarctica.

"I definitely think it's not from this earth. And if it is from Earth, the only other thing I think it could be is something the military are working on.

"They could be testing somewhere out there, like a drone or something we haven't seen yet.

"Whenever I see UFOs I get excited, I've seen a few of them over the years.

"I look up more than most people, so maybe that's why I'm always seeing them."

Edward's sightings were met with a mix of mockery and cynicism.

One person wrote: "That is very clearly the Lord and saviour himself."

A second said: "Looks like a body either ascending or descending."

Another commented: "My God. It's clearly a seagull."

One wrote: "Ah yes, such high-resolution imagery means that we can instantly identify anything in the sky.

"Definitely a UFO because it's impossible to verify what it was if these are the only images."

And one remarked: "It's Bobba Fett in Slave One."