MRSA bacteria cause staph infections that are resistant to many antibiotics. These bacteria are among the leading causes of bacterial infections in hospitals. They often cause pneumonia and infections of the skin and soft tissue.

Current treatments for MRSA include a combination of antifolate drug trimethoprim (TMP) and an antibiotic known as sulfamethoxazole. These treatments target the enzyme dihydrofolate reductase (DHFR), which is vital for the cellular replication of MRSA. A co-factor called reduced nicotinamide adenine dinucleotide phosphate (NADPH) is required for this enzyme to work.

DHFR inhibitors work similarly to a lock and key. They bind to MRSA enzymes by fitting into a 3D structure that only allows molecules that fit precisely to enter.

However, over time, MRSA has mutated and become resistant to these drugs. One reason for this is the well-known F98Y mutation, which causes a slight change to the 98th amino acid on the DHFR enzyme and ultimately makes inhibitor drugs unable to bind to it like a lock and key.

For some time, scientists have been unable to map the mechanisms underlying how this mutation leads to drug resistance. However, they know that identifying how these mutations make MRSA resistant to treatment will help them predict new mutations and develop new drugs to target MRSA more effectively. 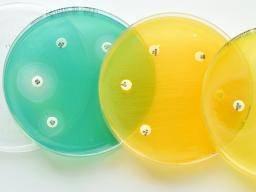 In a recent study, researchers at Duke University in Durham, NC, investigated how MRSA’s mutations confer resistance to certain treatments.

They found that MRSA’s resistance stems from the F98Y mutation causing a chirality preference for the NADPH co-factor, the catalyst for mutations in DHFR.

Chirality refers to the handedness of a molecule, whereby it is not possible to overlay its mirror image without overlaps — for example, in the same way that a person cannot overlay their left and right hand without their thumbs sticking out on different sides.

“This is the first example of an enzyme that exploits the chirality of its co-factor in order to evade its inhibitors,” Graham Holt, a grad student at the Donald Lab at Duke University, told Medical News Today. “Now that we see this happening, that will help inform computational strategies to develop better inhibitors.”

The research appears in the journal PLOS Computational Biology.