Over the weekend it was announced that Kim Medcalf will be reprising the role of Sam Mitchell on the popular BBC soap.

Danniella, 48, who originally played the fiery former lap-dancer, took to Twitter to share her thoughts on the news and threatened to take legal action against the corporation.

She wrote: "Wishing Kym the best of luck at @BBCEastenders__ yet again this poor woman has to recreate a Samantha Mitchell as close to my last two recent come backs on the square go smash it darling..x oh but not to @bbceastenders my legal team will be in touch."

In a second tweet, she added: "Bet you all can’t wait for my new book now can ya ….. oh it’s gonna go way back to the things I’ve never ever told #beafraidpeople #itsallgood."

Susanna, 51, invited showbiz correspondent Richard into the studio on Monday morning to discuss the latest celeb headlines, and the conversation quickly turned to Danniella's tweets. 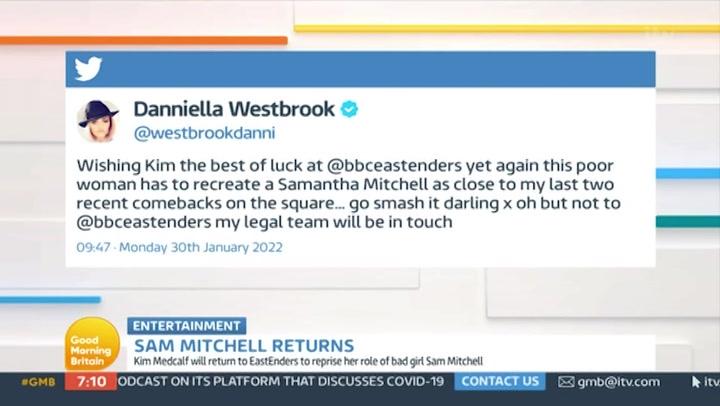 Richard, 52, claimed that Danniella had "lashed out" at the soap as he read out her tweets sarcastically.

Susanna and her co-host Ed Balls could be heard laughing in the background as Susanna commented: "Are we afraid? Or is it all good?"

"I don't know! It could go either way!" Richard replied whilst laughing too.

Danniella's latest comments contradict what she said earlier this month about being replaced on the soap.

Commenting on the news over on her Instagram, Danniella wrote: " The @bbceastenders have not contacted me to say they are re casting or if they have. But that’s ok. Who plays Sam next I wish all the luck in the world to. Enjoy. #outwiththeoldinwiththenew."

Good Morning Britain airs weekdays at 6am on ITV and ITV Hub.