Taoiseach Micheál Martin has tested positive for Covid-19 and will not attend the White House for an in-person meeting with US President Joe Biden.

It emerged Mr Martin was positive late on Wednesday night at a gala event where up to 800 people were in attendance for the Ireland Funds gala.

Mr Martin was due to accept an international leadership award but was whisked away shortly after US President Joe Biden welcomed him to the event which took place at the National Building Museum.

The full Irish delegation and media were required to have a Covid-19 test on Wednesday before travelling to the White House.

Mr Martin tested negative on his antigen test but a positive test was picked up from a member of his delegation.

The news broke right before Mr Martin was due on stage to accept the award and give a speech.

Speaker of the United States House of Representatives, Nancy Pelosi said: “I would invite the Taoiseach to the stage but I have been informed that the Taoiseach is on call as one of the leaders in the world.” 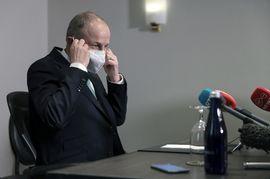 But then, Ireland’s Ambassador to the US, Dan Mulhall, took to the stage to accept the award on behalf of the Taoiseach and break the news to the room.

He said: “You may wonder why I’m here, well I’ll explain.

“This evening, before we left to come here, all members of the delegation were tested for Covid-19 and the test on the Taoiseach was negative.

“But because a member of the wider delegation tested positive and while that test was being checked and rechecked, out of an abundance of caution, the Taoiseach was tested just as he left to come here and sadly, that test turned out to be positive.

“So, the Taoiseach has asked me to explain this and to deliver the speech on his behalf.

A spokesman for the Taoiseach said he is feeling fine, is isolating and adhering to public health guidelines.

The positive Covid-19 test for the Taoiseach means he will no longer be able to meet US President Joe Biden on St Patrick’s Day.

Preparations are underway for a virtual event instead.