A woman lovingly watered a houseplant "every single day" for nearly three years before discovering it is actually made of plastic.

Ms Liu shared images of the succulent on social media and admitted she felt silly after noticing her mistake.

The woman from China, said she bought the plant online and "took care of plant like a baby".

However when she shared images online, she said she realised that she could not move the leaves with her hand and it soon dawned on her that it was actually made of plastic..

The plant had blue-coloured veins which changed colour over the years, leading to her believing the succulent was growing and developing nicely.

She continued to water the plant over the subsequent years and believed it was growing well and looked healthy.

Adding she "took care of the plant like a baby" and "watered it every single day".

Admitting the discovery left her feeling stupid, she said that she could see the funny side.

This comes as last year Caelie Wilkes "religiously" watered her houseplant for more than two years. 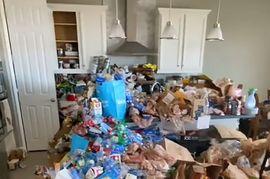 The woman, who had a strict watering schedule for the plant was "devastated" when she found out that her plant wasn't real.

She told friends on Facebook that she feels as though the last two years had been a "lie".

It was only when she went to re-pot the succulent that she noticed it was fake.

She said: "I just wanted to keep good care of it. I absolutely loved my succulent".

She explained that after finding a cute vase which suited it perfectly, she decided she would re-pot it.

But as she started to pull it out of its original plastic container she saw that it was attached to a block of foam, and decorated with sand which was glued on top.

She said: "Tried my hardest to keep it looking its best, and it's completely plastic."

Her story was shared to an Australian indoor plant group Facebook page, where a number of others admitted they'd also made the same mistake.

One said: "My friend at work always kills the plants because she doesn’t water them, so I put a fake one in the cafe. She watered it for a month before I told her it was fake."

And another added: "Another said: 'My dad watered one of my mum's plants for a year after she died not realising it was fake. We had a good laugh about it, I bet mum had a good chuckle upstairs too."