The average person produces about a pound of poop a day. Where does it all go? The answer depends on where you live. If you have a flushing toilet, your metabolic output spirals down the underground pipes to massive wastewater plants that clean the water and dispose of the rest the best they can—by destroying or landfilling it. In places where flushing systems aren’t possible, residents build cesspits and outhouses, where sludge accumulates and eventually needs to be emptied.

Because excrement spreads diseases, people put a lot of effort into getting rid of it as quickly as humanly possible. But now, scientists and engineers are telling us that we’ve been wasting our own waste. When recycled properly, this cheap, fully renewable, and readily available substance, regularly produced by all 7 billion of us living on this planet, can grow food, cook dinner, fuel cars, and generate electricity. Here are a few cutting-edge technologies that are already upcycling people’s poop—and may get to yours soon.

1. Cooking Your Dinner With Crap

The urban settlements of Kenya’s capital, Nairobi, are so overcrowded that there’s no space left for building toilets, including the simplest outdoor latrines. But people still have to go somewhere. So the residents relieve themselves into plastic bags, tossing them to the side of the road where they accumulate, spread, and float around the next time a torrential downpour floods the area. The bag phenomenon even has a name: It’s called “Kenya’s flying toilets.”

At the same time, Kenya has a huge deforestation problem. Wood is the only sources of energy available to most, so people cut down trees and convert wood to charcoal, used for anything from cooking dinners to drying tea leaves for the country’s tea industry.

A startup named Sanivation has stepped in to fix both problems with the same substance. Sanivation provides low-income households with small porta-potties that accumulate waste in hygienic containers underneath the toilet seats, which a service team then collects and takes to their repurposing site. Human excreta contain a lot of lignin—a complex organic polymer that comes from the cell walls of plants we eat. When heated, that lignin transforms poop into a sticky substance. If you throw more burnable fiber—such as sawdust or agricultural refuse—into that sticky mix, the result can be shaped and dried into fuel briquettes. The demand from factories is enormous, according to Sanivation founder Emily Woods—during their fourth month of selling “poop logs,” they sold 50 tons. “We are only limited by how much we can produce,” she says. 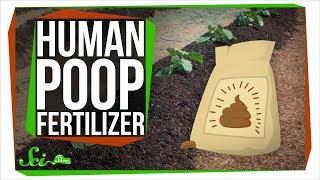 2. Whipping Up a Sewage Smoothie for Plant Health

Transforming manually collected feces into firewood likely won’t find a big market in the Western world, but there are other ways to reuse our metabolic output here. Ajay Singh, a scientist at the University of Waterloo in Ontario, noticed a lot of big trucks buzzing around his city on a regular basis. It turned out the trucks were hauling human waste. Typically, this sewage is then dewatered, and that water is purified enough to let it out back to nature—but the remaining biosolids are a sticky issue. Often, biosolids are dumped into landfills or incinerated, contributing to greenhouse gas emissions. And in some locales, they're channeled into so-called “lagoons”—essentially massive cesspits slowly seething underneath their PVC covers.

Biosolids are sort of a hot potato in the sewage world: No one wants them because they're too gunky, chunky, and stinky to pump or purify them like liquid. But they're also high in nutrients like nitrogen and phosphorus, which are excellent fertilizers.

With a colleague, Singh figured out a way to purée biosolids into a “sewage smoothie.” They built an industrial-size blender that whips up the biosolids into the consistency of a milkshake. (To test the idea, they first experimented with a regular kitchen blender, but please don’t try this at home!) With an ultra-sharp blade that spins so fast that it shears the bacterial cells present in the sludge, the blender solves two problems at once: It kills the pathogens and homogenizes the mix to the point that it can be pumped into trucks that take it out to farmlands and inject it into the soil. Today, their company Lystek whips biosolids into a bio-fertilizer mix called LysteGro—a nutrient-rich health food for plants.

DC Water, the wastewater plant in our country’s capital, has another kitchen-inspired approach to upcycling poop—not in a blender but a pressure cooker. The plant uses 24 colossal pressure cookers to simmer the city’s output at 320°F and six times the regular atmospheric pressure you’re feeling right now for half an hour. At the end of this cycle, all the pathogens are dead and the sewage stew is loaded up into massive concrete tanks called biodigesters, where multitudes of microbes chew through (or “digest”) the sludge. In the process, they burp out methane, which the company collects and burns to spin the plant’s electrical turbines.

Prior to digestion, DC Water produced 1100 tons of biosolids per day. Now, the mighty microbes reduce it to about 450 tons a day, with the difference being converted to gas for green energy production. Some of the carbon gets returned to the earth from which it came: At the end of their feast, the microbes leave behind a form of black gooey compost, which is dewatered and dried up into an organic fertilizer product packaged into neat bags and called Bloom, available for purchase by anyone, from farmers to landscapers to gardeners. It’s a perfect example of why we shouldn’t be wasting our waste, says Christopher Peot, DC Water’s director of resource recovery: “There’s no such thing as waste, only wasted resources.”

4. Furnishing Fertilizer for Growing Your Own Food

A massive pressure cooker isn’t something an average household can afford, but there are smaller and cheaper biodigester options. Israeli company HomeBiogas makes affordable personal biodigesters that can “digest” food leftovers in a similar way. They can also be attached to pump toilets, which use manual pumps to flush and thus require significantly less water. The digesters, which look a bit like camels resting on the ground, are seeded with specific microbes that decompose biomass and convert it into methane, which travels through a hose to a stove or a hot-water heater. And from the digester’s rear drips the other valuable output—a brown, goopy liquid that can be a potent fertilizer and which slowly accumulates in a bucket.

For countries where energy is expensive, HomeBiogas digesters (costing about $600-$700) can offer real savings, according to one of the company’s founders, Yair Teller. For the United States, where energy is cheap, the biodigesters may be a source of inexpensive organic fertilizer. And they also may be a boon for off-the-grid communities regardless of their geographical location. Imagine growing your food and cooking it with your own dung!

5. Tech to Turn Poop to Petroleum

Besides kitchen stoves, excrement can fuel just about anything, including cars. The Metro Vancouver wastewater plant in British Columbia is testing a new technology that converts sewage into a form of crude oil. Developed at the Pacific Northwest National Laboratories (PNNL), one of the United States Department of Energy’s labs, the complex apparatus’s centerpiece is a slick, silver serpentine pipe. When loaded inside the pipe, the sludge is heated to about 660°F and squished at 200 times the normal air pressure.

These hellish conditions, called hydrothermal liquefaction (HTL) in scientific terms, mimic those that had forged oil and gas deep in the bottom of the world’s oceans over millions of years. At such temperatures and pressures the sludge doesn’t cook per se, but its long organic molecules break into shorter, smaller carbon compounds, which comprise oil and gas. The difference is that Mother Nature takes millions of years to do it while the PNNL technology takes 15 minutes. Essentially, you load in stinky black goo, and you extract stinky black goo, but the difference is that the outflowing goo has a high economic value.

It still needs to be refined like any oil, says Paul Kadota, Metro Vancouver’s program manager, but it helps with sewage disposal and it reduces the amount of oil that must be extracted from earth, because we still depend on fossil fuels. The project is in pilot phase, but if it works, Vancouver residents would be quite literally powering their cars with yesterday’s dinner.