Temperatures plunged to the single digits on a late January day as police from across the area spent hours negotiating with an armed man who had barricaded himself in a house in Waynesboro.

Waynesboro Police Chief James Sourbier said he had never been colder in his life. But things improved once the coroner's office showed up.

Franklin County Coroner Jeff Conner was not there because anyone had died. Instead, he rolled up in his team's new dynamic vehicle outfitted as a "rehab unit," and offered freezing first responders a place to get warm, have some coffee and fill their stomachs, refreshing them for more hours of work.

The vehicle is a former ambulance that the coroner's office bought almost two years ago to use in its regular duties investigating deaths and transporting bodies. It is stocked with drinks and snacks but also comes equipped with tools for forensic investigations. Sourbier called it an "indispensable" service that, on that day in January, eliminated the "gross inefficiency" of his officers going back and forth to the station for equipment.

"The coroner's office has always been ardent in its advocation of cooperating with municipal police authorities," Sourbier said. "I think this is a very clear, visible, commitment."

That's exactly why Conner implemented the rehab unit in the first place.

Throughout his more than 30 years with the coroner's office, members of fire and police departments have always assisted at the scenes of death investigations, Conner said. Operating the rehab unit allows his office to return the favor.

With many struggling to attract volunteers and most ladies' auxiliaries "long gone," fire departments are rarely able anymore to offer refreshments to their members fighting fires, said Keila Trace, of Franklin Fire Company. They may be able to bring some drinks, but that's usually it.

The rehab unit also has generators, heaters, and a canopy. Another important amenity that comes along? A portable toilet, in handicap size. With a heater.

A relatively roomy, convenient place for first responders to relieve themselves can be a luxury on the scene of a fire or police incident - especially ones in rural areas with few or no bathroom options nearby.

The rehab unit came about mostly by chance after the coroner’s office bought a former ambulance to add to its small fleet of SUVs.

“The average person would have turned around and ran away from it,” Conner said of the 1997 emergency vehicle, which had previously been in service in Somerset.

Worn and weathered but not wrecked, Dave’s Truck Repair went to check it out in West Virginia before Conner dropped $1,750 to buy it. Including repairs and other expenses related to the vehicle and the services it provides, Conner said his office has invested about $85,000 into it -- all covered by fees and grants, not tax dollars. 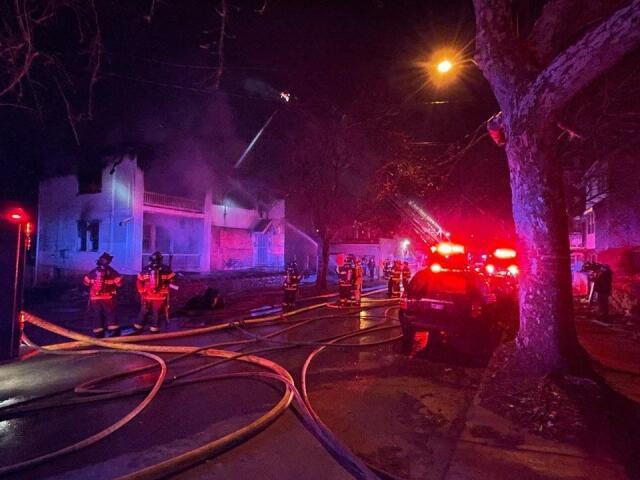 Outfitted with a fancy stretcher that helps the coroner and his team move bodies more easily than their Chevy Suburbans make possible, the coroner's office began using the former ambulance in May 2020.

The additional space made it possible to bring along snacks, drinks and even a few small appliances - things that would make spending hours out in the field a bit more comfortable and convenient.

“It was originally intended solely for the coroner’s office. The goal was to be self-supporting on a homicide scene, which can take up to 12 hours,” Conner said.

But the coroner’s office wasn’t going to hoard the amenities to itself. Soon, Conner got to thinking about how he could provide rehab services for Franklin County’s first responders. Today, there is a large storage room at the coroner's office on Franklin Farm Lane, formerly the home of Chambersburg's state police barracks, filled top to bottom with a variety of snacks and drinks for the rehab unit.

There is one other rehab service in Franklin County, run by the 911 center, but chiefs or representatives of several fire departments said significant need remains.

"It's nice to have both of those (rehab units) within the county," said Tom Rine, chief of Pleasant Hall Volunteer Fire Company. "Especially in the summertime with multiple incidents in the same day and we need (rehab teams) on different ends of the county."

Pleasant Hall, which as of early March had not yet been to a scene with the rehab unit, is among the few fire departments in the county that still has an auxiliary that can run refreshments at fire scenes, Rine said.

A rehab unit from Washington County, Md., also responds to incidents in Franklin County, but only if departments from Maryland are called in, Conner said. In effect, that unit doesn't typically travel beyond towns on the state line.

Now about seven months since its first response, the rehab unit is automatically called to some fire scenes, Conner said. Franklin Fire Company, for example, has it listed for automatic dispatch to working fires that station is lead on, Trace said. In the first months the rehab unit was in operation, it was often a matter of the coroner's office hearing a call and making sure it was OK to respond or a member of a department thinking to call in the unit. This took up precious time.

“They’re setting it up now so that we’re more automatic. That way, the half hour that they were delaying is the half hour it takes us to get put together and then get there. It’s not like we’re sitting there fully loaded with all the equipment. We have to take our equipment off (the ambulance) and put (the rehab) equipment on. And the vehicle is housed (in the county maintenance garage on North Second Street), so that’s a delay,” Conner said.

Text and graphics normally identify the former ambulance as a Franklin County Coroner's Office vehicle. That's not good if it is at a scene providing rehab services and not as part of a death investigation.

The coroner's office came up with a solution: use vinyl decals to transform the coroner's transport vehicle into the rehab unit. Conner had Chambersburg-based company Directional Traffic create a set of decals that can be applied to edit all problematic text.

"It's like what they put on race cars," Jordan Conner said. "We can use them two or three times before they need replaced. Each set is $12, and that completely changes the vehicle."

Conner expects that the rehab services his team provides will grow as more departments use them. It may even make more sense to one day add a trailer that can be kept stocked up and ready to be hooked up to any of the team's vehicles, making it easier and quicker to respond to a scene.

"Every scene, every call, we evolve."

You can help stock the rehab unit

Conner said the coroner's office provides all the snacks and drinks offered in the rehab unit; fire and police departments are not billed. Donations are welcome.

Amber South can be reached at asouth@publicopinionnews.com.