Doctor Who: The Daleks' Timeline Explained

Some time after the setback at the end of "Genesis of the Daleks," the evil aliens develop space travel and time travel, setting out into the universe looking for new planets to terrorize and conquer. This gimmick allowed the series' writers to put them in all sorts of fun historical settings, from Ancient Egypt ("The Daleks' Master Plan") and the Mary Celeste ("The Chase"), to supposedly helping out Winston Churchill and the Allies fight off the Luftwaffe during World War II ("Victory of the Daleks"). The latter story gave the "Ironsides" a sweet British army green paint job and gave us Spitfires in space. 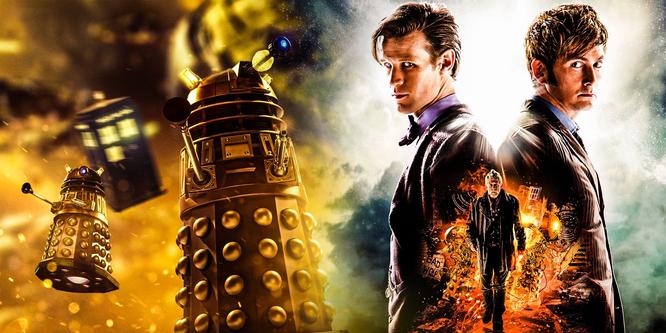 Out of all the billions of worlds in the universe, the Daleks have a particular fixation with Earth, resulting in dozens of invasion plans over the decades. An early attempt came in a more recent episode, "Resolution," where a Reconnaissance Scout landed on our planet in the 9th century, only to be thwarted by warring factions banding together to defeat it and dispatch its dismembered parts to the far-flung reaches of the globe. You can't keep an evil Dalek down, however, and an archaeologist in the 21st century unwittingly unearthed one of the pieces, which revived its missing parts and caused more havoc. Luckily, the Thirteenth Doctor (Jodie Whittaker) was on hand to cast it into a supernova before it could summon the Dalek fleet.

Returning to the early days of the show — that is, the period from the First Doctor's initial encounter with the Daleks and the Fourth Doctor's failure to annihilate them in "Genesis of the Daleks" — showdowns with the irate cyborgs skipped between adventures in the then-present day and the far future. Shortly before the seminal episode "The Daleks," they attempted to conquer Earth in the 21st Century ("Dalek Invasion of Earth"), with several Daleks trundling around London.

Without having to worry about a canonical timeline, the show's original writers gave us several dastardly Dalek masterplans, from trying to eliminate the Doctor while hiring The Master to start a space war ("Frontier in Space"), altering history to make their earlier invasion plan succeed ("The Day of the Daleks"), attempting to implant mankind with the "Dalek Factor" to make us more like them ("The Power of the Daleks"), and holding the galaxy to ransom with a lethal plague ("Death to the Daleks").

Even the Seventh Doctor (Sylvester McCoy) had an adventure set during this time period, returning to 1963 to retrieve the Hand of Omega, a powerful Time Lord weapon that the First Doctor left behind ("Remembrance of the Daleks") before tricking Davros into firing it and destroying Skaro. But wasn't Davros exterminated by the Daleks in "Genesis of the Daleks?" Yeah, about that...