The Married At First Sight glassing saga takes another cruel twist at Wednesday night's boozy dinner party which is either good news or bad news, depending on whether you see the glass as half full or half empty … you know, before it was smashed.

It all ends with the show's self-proclaimed petty wife crying about being gaslighted which is weird because, acting surprised that you're getting gaslighted on Married At First Sight is like going to a Body Attack class and being shocked that you have to exercise.

We also abandon the Haus Of Trash and travel over Sydney Harbour Bridge to bust one cheating wife as she hooks up with another man in a dark underground Kings Cross nightclub. The only question we're interested in: Do they end the night with a trip to the 24-hour Maccas that's directly across the road from the bar?

After a week-long couples' retreat, the owners of the picturesque Southern Highlands estate arrive home to find their mansion completely destroyed and promptly evict the MAFS lunatics.

Everyone's back in Sydney and the hazy filter that comes with a romantic getaway quickly fades, leaving our couples to face their imperfect relationships in the harsh light of day. They all deal with it in their own unique ways. It's just a coincidence that all their unique ways involve alcohol.

"Last night was meant to be the night Matt and I sat down and had a serious discussion about what we're gonna do at this commitment ceremony," an unimpressed Kate informs us.

"Instead, he was drunk and I couldn't say two words two him. I didn't want him near me."

Oh Kate. Let's not be overdramatic. You don't even want him near you when he's sober.

So, word has it that Matt snuck out to the pub. How drunk was he? We cross now to a live witness account.

"Matt was pretty blind last night, running around the building," Mitch tells us, offering a dramatic impression of the scene.

Look, we're sure this isn't the case. People have a habit of exaggerating these sorts of things. — like Olivia did last night when she described Domenica's smashed glass incident like it was a scene from The Joker. There's no way Matt would've-

"I literally just wanna vomit and hide in a hole," he squints at us before falling over.

Honestly. We try to defend these doinks and they just let us down every damn time.

Minutes after arriving back in Sydney, Carolina lies to Dion so she can sneak away and meet Daniel to continue their steamy affair. What excuse does she give her husband? Nothing elaborate. She just tells him she's ducking out to get brunch at an EDM festival.

The plan is a success. Of course Dion has no interest in joining her. But she still has to lay low and hide her fling with Dan. So she arranges to go across the Sydney Harbour Bridge and meet in an underground Kings Cross nightclub where there'll be zero chance of running into anyone they know. It's perfect and intimate. Just Carolina and Daniel … and the TV crew who lurk just footsteps away while filming them pash on a shadowy staircase.

The delightful thing about Married At First Sight contestants is they've got a set of rules for themselves and a set of rules for everyone else. Just moments after cheating on her husband, Carolina breathlessly explains to us why Domenica is a terrible person.

"Domenica is a evil, mean girl. She's a bitch," she vaguely quotes that goth from Mean Girls.

Can you believe the producers are still forging ahead with the weekly dinner party tonight?

"I definitely think there's gonna be an altercation between Dom and Olivia," Samantha observes.

Ah, yeah. After everything that's happened this week, do we really think these whackjobs should be locked in a room together with more alcohol and glass? Absolutely not.

"I'm not gonna have wine," Dom says, arriving at the cocktail party and pouring a ginger ale. "I'm not drinking alcohol tonight."

Boo! You will consume your individual carafe of wine as per the clause in your contract.

Behind the scenes, producers are freaking out. MAFS doesn't exist if the lunatics are sober.

Red alert! Red alert! If one of the lunatics realises they don't have to drink excessively, then what if the others find out and follow? Just like that — a decade-long television empire is completely wiped out. 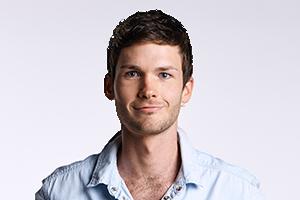 Matt's still feeling queasy from his all-night bender, so we compromise and allow him to have a shandy instead of an individual carafe of wine. It has been a rough day for him and the cloud of hangxiety looms low. He's desperate to free himself from the regret and decides to apologise to his wife in front of the group.

"My actions, my behaviour were shocking — they were out of line and I'm sorry I did that," he says. "My behaviour was nothing short of disastrous and … a complete dick."

Oh, Matthew. Your bender doesn't even crack the list of Top 100 most outrageous MAFS incidents. For perspective, the toilet toothbrush only clocks in at number 24. Take a breath. You're not even a blip on the radar.

While everyone else applauds and accepts the apology, it's silence from Kate. At first we think she must be hiding, so we start making that pst! pst! pst! noise you make when you're trying to get the attention of a really cranky cat.

Then we realise she is indeed sitting next to Matt and she's just choosing to ignore him.

"I'm gonna finish off my corrrrn," she says, pretending to cut up her salad "It has been a while since I had baby corn. It is quite fun."

Oh yeah. Baby corn's a total riot. And did you see the snap peas? It's like a rave in here.

"That's a good apology …" she smiles at Matt before snapping her head sideways to death-stare her nemesis.

At first, Dom doesn't notice because she's asking Dion how his week has been. It's a conversation that sets off Carolina and reignites the feud between our glassing trio: Dom, Carolina and Olivia.

Olivia goes back to muttering things and slams her head down on the table, pretending to fall asleep.

"Don't sit here and be like, 'Who said what and na-na-na-na-na-na'," she pulls a weird face and puts on a high-pitched voice.

Olivia insulting Dom's voice is what provoked the smash glass in the first place — and it's this new low that's met with gasps from the table.

Dom tells Olivia to butt out of her personal conversation and then Olivia whips out a comeback she has just been dying to use.

Now's an appropriate time for Carolina to start chanting in the background. "Hypocrite! Hypocrite!" she sings, while distributing pitch forks to the villagers.

"Oh, poor Dom! We can't yell at her but she can yell at everybody else," Olivia taunts.

Carolina piles on like a bratty younger sister trying to impress her older siblings. "We can't yell at her but she can smash a glass in our faces."

Oh, cool it! Carolina, shouldn't you be at an unregistered dentist getting matching veneers with your new secret boyfriend?

Olivia decides to offer a blurred version of history again.

"She was standing over me screaming with a glass between her fingers!," she shrieks.

It's this lie that sets off Dom. Not even the ginger ale can subdue her rage.

We know the half-smart comment that's about to be made. In five, four, three, two …

"Hold your glasses everyone!" Carolina spits.

Annnd there it is.

"Take them away from Domenica, she might smash another one," she mocks. "Why are you not drinking, Dom?"

It's now the husbands step in and Olivia begins to fake cry. Her man Jackson consoles her like a preschooler again and tells her to play nice.

"I will apologise for those snide comments," she sniffs. "I didn't realise they were even coming out of my mouth. My bad, I'm so sorry."

But it's all for show. After storming off in a huff, she reveals her true feelings.

"I just apologised and I'm not sorry for anything," she eye-rolls. "I feel gaslighted"

It's Married At First Sight, doll. If you're not feeling gaslighted, you're not doing it right.

MAFS is available in NZ on Three and ThreeNow.