Bacteria in water is a huge problem.

Over two million people die every year from diseases that can be directly linked to poor water sanitation. And this is only going to get worse as fresh, safe drinking water becomes increasingly scarce amid global warming.

The World Wildlife Fund estimates that by 2025, just four years from now, more than two thirds of people globally will face some type of water shortages, leading many with no choice but to consume bacterially contaminated water.

The way we currently kill bacteria in water is to add chlorine, which is highly effective, but not without its problems.

Recent studies show that chlorine can promote what’s called gene-exchange between bacteria – a process that can speed up mutations and pass along traits like antibiotic resistance. It also produces super toxic by-products in the water – like trihalomethanes – although these are less common and usually manageable.

While chlorine remains a safe method of water disinfection, it is also relatively expensive and can be difficult to transport to remote areas. Chlorine is typically added to drinking water either as an industrially produced gas or as a very corrosive hypochlorite compound, making transport challenging.

The combination of emerging gene-exchange, trihalomethanes and transportation challenges means that finding alternative ways to kill bacteria and purify water is important for the future.

Working with my colleague Dr Andris Sutka from Riga Technical University in Latvia, we have found a new material that’s nearly as effective as chlorine when it comes to killing bacteria – without promoting bacterial gene exchange or creating toxic by-products.

Our research, recently published in Advanced Sustainable Systems, uses a mineral that is abundant in ore deposits across Europe, first identified inside the Bellerberg volcano in Germany in 1964, called brownmillerite.

When we added a powdered form of brownmillerite into bacterially contaminated water in the lab, only one bacteria from every 10,000,000 survived after 30 minutes. 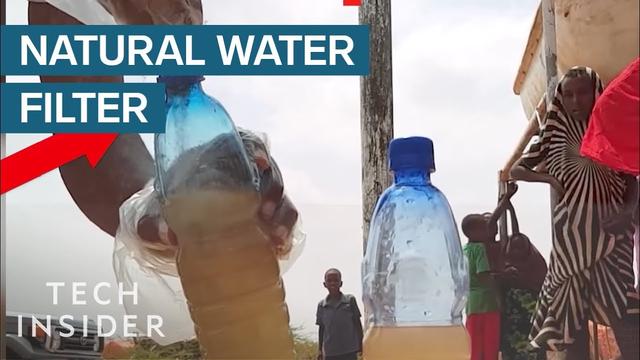 We then tested the powder on some sewage sludge from the Daugavgrīva water treatment station in Riga. We found that, even in the dirtiest water, the brownmillerite still killed 9,998 out of every 10,000 bacteria in 30 minutes.

The brownmillerite we used is exceptionally safe, consisting of only three different elements – calcium, iron and oxygen. These break down into components that are both safe for human consumption and don’t harm the environment.

While other minerals and compounds have been tested as alternatives to chlorine for water disinfection, our research shows brownmillerite is the safest and quickest material found so far.

We were, however, puzzled by why brownmillerite was so good at killing bacteria.It has been known for some time that minerals containing oxygen can release so-called ‘advanced oxidation products’ that can ‘clean’ wastewater – but not enough to explain the results here.

When we examined what was going on we found that when the brownmillerite powder hits the water it undergoes a structural transformation – the calcium dissolves out of the crystals.

These advanced oxidation products are phenomenal at killing bacteria, and kill them so quickly that there is no chance for gene exchange to occur.

This structural transformation also causes the powder to change from a sponge-like shape to a structure with lots of sharp flat blades. These sharp blades rip up and kill any bacteria that lands on them.

The combination of these two mechanisms means that in the future it may be possible to be anywhere in the world, tip some of this cheap powder into your water and be confident that it won’t make you sick.

So far, we have only used lab-produce brownmillerite, the manufacture of which would be expensive and difficult to scale up. We therefore need to test whether naturally-occurring brownmillerite (found in limestone) is similarly effective.

If so, then this water disinfection tool could be made widely available, relatively cheaply. In fact, brownmillerite is created in a phase of cement production.

There is a lot more in water apart from bacteria that needs removing before you can safely drink it – like dirt, microplastics and fertiliser. You certainly wouldn’t drink sewage sludge, even if you were confident it contained no bacteria or microbes.

This is why we are also looking at whether we can combine the brownmillerite powder with a material that sticks all of this ‘other stuff’ together, called a coagulant, to produce a one-stop material that can simply be added to water and make it safe to drink.

There is still a way to go, but we are getting closer to having tools to cheaply and easily purify water – no matter where you are in the world.