Realtor explains why home has four toilets in same bathroom

A real-estate listing in Wisconsin has gone viral thanks to the usual layout of its largest bathroom, which includes four side-by-side toilets — with no dividers — arranged directly in front of four separate sinks.

The house, built in 1851, didn’t originally feature four toilets in the same room. This unique addition came later, after the first owners donated the South Milwaukee home to the Girl Scouts around 1920 or 1930. During their ownership, the organization went ahead and made several additions to better suit their needs, including the “infamous bathroom,” according to listing agent Jane Dichristopher of Mahler Sotheby’s International Realty. 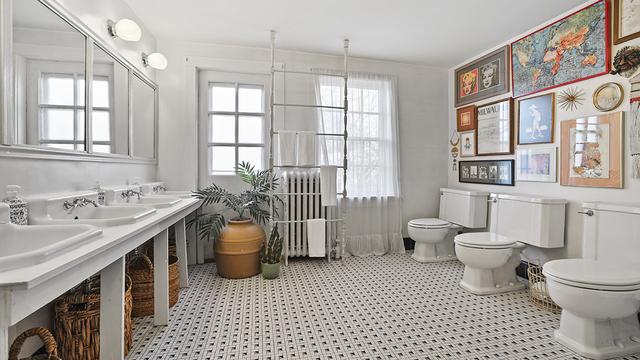 The house changed hands twice since that time, but the quadruple-toileted bathroom has remained.

“Both owners really did keep a lot of the historical integrity of the house,” explained Dichristopher, who said the home is also rumored to have been part of the Underground Railroad in the 1800s. “It still has a lot of original features. It’s lovely.”

The listing for the house — known locally as the Hawthorn House — began gaining attention earlier this week, after it was featured on the Instagram account @ZillowGoneWild. Most commenters were baffled by the bathroom, with one user claiming she’s “had nightmares like this,” and another saying, “It was such a normal house until it wasn’t anymore.”

Dichristopher, however, kindly pointed out that there are three other bathrooms between the main home and included in-law suite, meaning there’s no reason to believe the eventual homeowners would somehow be forced into a communal potty-time scenario.

Despite the toilet situation, and perhaps even because of it, Dichristopher said there’s been plenty of interest in the historical home. As of this week, there was also an offer pending.

“I have had a ton of people reach out to me, and we did initially have a lot of showings due to the marketing,” she laughed, “and the commodes.”