Sewage spills: Metro warns against what you flush down the toilet Manage Site Notifications

Given the rise in complaints about sewer blockages, which has become rampant citywide, the Advertiser carried out an inquiry into the problem to find the underlying causes of the sewer issues.

Our sister publication Boksburg Advertiser caught up with Water and Sanitation Department’s Thokozani Maseko, who is the divisional head in the water operations division.

His department is responsible for repairs to water pipe bursts, leaks, valves, hydrants and repairs to the sewer network.

During the exclusive interview, Maseko said residents of the City hold the key to helping the municipality beat the scourge of sewage spills, which include avoiding sewer system misuse.

The department has identified residents’ flushing behaviour as one of the primary things that bung up the plumbing in homes, the City’s sewer network including wastewater pipes and the treatment plants, as well impacting the environment.

It’s an indisputable fact that hundreds of properties suffer sewer flooding caused by blockages every year in the City, creating misery for homeowners and businesses. This leads to high repair bills and placing the health of our environment and communities at risk.

However, the department believes that the major causes of the blockages, which result in spillages in the City’s sewer reticulation system, could be avoided if people stop treating their toilets and drains as trash bins and start disposing of items used daily properly rather than flushing them down the toilets.

Shining a horrifying light on residents’ flushing behaviours which clog up the sewers, Maseko said people are flushing down the drains many items, sometimes without knowing the gravity of their action.

Those items are clogging up the sewer system and even have the potential to damage wastewater treatment plants.

“We have tangible evidence to prove that certain items people obliviously flush down the drain, such as sanitary products and food waste, are the biggest contributors to sewer blockages and are as a result devastating for the environment,” maintained Maseko.

Workers at the treatment plant fish out more than 50 000 tons of foreign objects.

According to Maseko, the things that the sewer reticulation system is designed for are toilet waste (urine, faeces, and toilet paper) and sink or basin or bath waste (water, washing liquid and soap).

“Anything other than the above-mentioned items is causing serious problems in the sewerage system when flushed down the toilet or drain.

“Some of them are obvious, but there are also a few others the City believe people thought were okay to pass in the sewage system.”

The following items shouldn’t be flushed down the toilet or drain to minimise sewer line blockages and ensure the wastewater treatment system keeps running smoothly:

They are, but not limited to, sanitary products (such as wet wipes, pads and nappies), condoms, nappies, cigarette butts, cloth, rope, general litter, building materials, debris, grease and food waste such as fats, oils and bones.

“Though some of the sanitary products may be labelled flushable, the truth is the opposite, as they do not disintegrate like normal toilet paper – hence accountable for causing the vast majority of sewer blockages, leading to costly repairs. 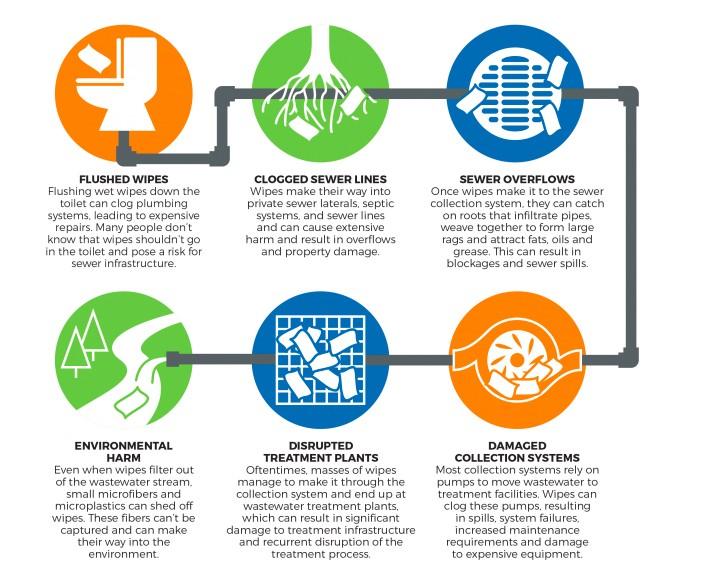 “Operations to repair and remove inappropriate materials from the sewer system, which causes blockages, overflows and damage to the sewer network cost the City millions of rand.

“It also wastes resources that could rather be used elsewhere to improve services to our communities. That’s why it’s important for residents to change their flushing behaviour as this can save money and the environment to a greater extent,” explained Maseko.

Maseko pointed out that there are often misconceptions that recurring sewer overflows are due to faulty infrastructure or the lack of maintenance.

“It’s not true; I can assure you that this is hardly ever the case. Most of our blockages are caused by the foreign objects people throw in the drain or flush down the toilet.

“We have also found that sewer overflows can be caused by the water meant for the stormwater system entering the sewerage system, either due to illegal cross-connections on private properties.

“When it rains people tend to divert the rainwater from their yard into the sewer drains and the rocks and sand go in and cause blockages.

“Also, the extra volume of water from these properties during rainfall can sometimes exceed the capacity of the pipes and leads to overflows, affecting the properties downstream.”

The City, therefore, calls on residents to please check that the stormwater from their property does not contravene the City’s bylaws.

Some of the big hospitality industries, such as hotels and restaurants, are also identified as prime suspects as they throw a lot of inappropriate items, such as oil and fats down the drain, blocking the system.

“In summer, because is warm, the fat is liquefied, but in winter when it’s cold it becomes as hard as a rock, thus causing blockages. The law requires such industries to have fat traps, but some of them don’t maintain those traps properly and the bulk of the fat reach our sewer system.

“From industrial areas, there is waste effluent from the plants, dirty water with minimal chemicals but they are no solid in them, and they do not influence the blockages.

Maseko said other culprits are illegal miners who deliberately block the system to use the effluent water to pan for gold in the disused mines.

“If it can stop all these activities, it means we will only have to deal with natural blockages, which are normally easy to handle with minimal resources.

“Of course, there are natural blockages that are caused by the movement of earth and resulting in misalignment on the sewer system.

“We also have instances where the tree roots infiltrate our sewer system and block it, but we don’t get a lot of these natural causes. So preventing the major causes, foreign objects, will drastically reduce the load, and there will only be a few incidents of sewer blockages.”

Maseko said changing the situation requires a renewed concerted effort by both the public and private sectors through raising awareness among consumers of what can and cannot be flushed.

Maseko maintained that his department normally responds within the stipulated turnaround time after receiving complaints, except during the hard lockdown when they were operating with reduced staff members at a time.

The department said the capacity of its infrastructure is upgraded from time to time to meet the demand and to keep it on a par with the required standard.

“The system is not an issue, the issue is the vandalism through the throwing of foreign objects.

It’s very important that people understand what the sewer line is designed for.

“It was designed for taking the specified waste from your house to the main collector line to the waste treatment works.

“While the stormwater system only collects rainwater from the roads and the houses then channel it to the river or streams, and it’s strictly rainwater that ends up in the rivers and oceans. The two don’t share the same function.

The City calls on residents to report sewer overflows, blockages and those who transgress the wastewater and industrial effluent by-law by contacting the call centre on 0860 543 000.