As Queensland Premier Annastacia Palaszczuk held a press conference in Brisbane Wednesday, the event was suddenly interrupted by the rude guest flying by as it decided to relieve itself. AUSLAN interpreter Mike Webb found himself in a predicament after a huge glob of bird poop landed on his shoulder and face live on camera.

“Oh, sh*t,” he was heard saying after realising that the bird had relieved itself right on top of his forehead. He took off his jacket, while someone rushed to get him some tissues to clean the mess.

The unfortunate incident happened midway through Deputy Premier Steven Miles’ speech that Webb was signing at the conference.

Although the event would have left many frazzled, Webb, a veteran professional, quickly resumed his duty without his blue jacket.

The incident led to a plethora of comments on social media, with many, including Palaszczuk, praising the “fabulous Mikey” for handling the incident like a pro. “Nothing stops our fabulous Mikey,” she tweeted after the press conference identifying the culprit as an “owl”.

Can confirm police have launched an investigation into this fly by hooting #notmikey https://t.co/0v5xttpmvJ

Even the Queensland Police joined in on the fun saying, “Can confirm police have launched an investigation into this fly by hooting”.

As the video and photos went viral, people couldn’t let go of toilet humour, while at the same time, appreciated Webb’s professionalism. While some argued saying “it’s good luck”, others didn’t agree to interpret the incident that way.

This is straight out of my nightmares 😂 https://t.co/iNtyIgy9sG

That’s good luck, or so they say https://t.co/MoclrhAiqM 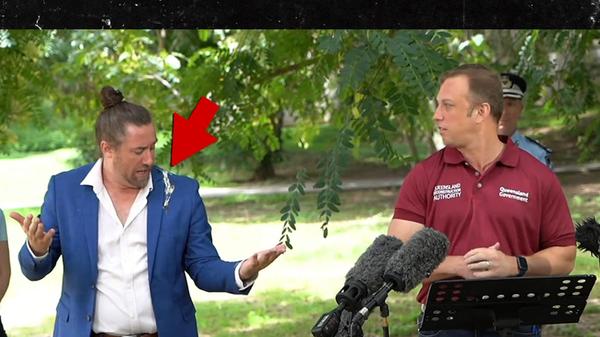 Quick tidy and back to work he went 🙂 https://t.co/lW5xLLemw1

Mike is a hero to many Queenslanders; this is one more moment showing why. https://t.co/yEpzDA4ttr