Comparing the Operating Costs of Calcium Hypochlorite and Trichlor

The choice of sanitizer can significantly impact the costs of operating a large aquatics facility. This article addresses potential costs associated with two commonly used sanitizers: calcium hypochlorite (or cal hypo) and trichloroisocyanuric acid (or trichlor).

When these chemicals are added to pool water, they clearly increase available chlorine, however they also affect pH, alkalinity and either calcium hardness or cyanuric acid levels.

Think of it this way: Every time these sanitizers are added to the water, they bring additional chemicals “inside” them as well. Sometimes these “extra” chemicals are beneficial, sometimes you will have to pay to get rid of them.

To compare the costs of using cal hypo with those of using trichlor, an estimate was made based on 2017 water and sewage rates in Fulton County, Ga., combined with 2017 chemical costs. This estimate shows that costs incurred by facilities using cal hypo might be considerably lower than those for the same facility using trichlor. Chart A shows estimated costs when adding 10 parts per million of available chlorine to a pool using the two sanitizers. An explanation of the assumptions used for the estimate follows.

Explanation of assumptions and estimates

When estimating the costs of treating pool water, simply looking at the price per pound of sanitizer does not account for less obvious costs and may lead to false assumptions about savings.

Trichlor has the opposite effect on pH and alkalinity — reducing it. And where cal hypo affects CH, trichlor increases cyanuric acid (CYA).

As a result of sanitizer choice, a facility may need to replace some pool water to counter a rise in CH or CYA levels. This can result in higher water and sewage costs. Further, because both sanitizers affect pH and alkalinity, this typically will need to be corrected with additional chemicals, further adding to costs.

Every pool is different, and accounting for every scenario may be impossible. To estimate costs incurred by the use of these sanitizers, certain assumptions were made for this comparison. The following explanations describe the reasoning behind these assumptions.

The amount of water consumed is a substantial component of running any aquatics facility.

As previously mentioned, cal hypo adds to calcium hardness, while trichlor adds cyanuric acid. Neither CH nor CYA are destroyed by chlorine, nor do they evaporate. This leaves draining and replacing water as the only practical way to decrease CH and CYA concentrations.

Splashout and filter backwashing reduce concentrations, but their impact changes from pool to pool, making it difficult to estimate effects on water consumption. Therefore, water usage from these activities was left out of this paper’s estimates. Nor was water consumption from evaporation factored in, since evaporation does not remove either chemical.

A minimum of 150 ppm CH is required for pool water, as stipulated in ANSI/APSP-11. For plaster pools, the National Plasterers Council recommends a CH of at least 200 ppm. When the water falls between 150 and 1,000 ppm of CH, the saturation index can be maintained to prevent scale and cloudy water formation, according to ANSI/APSP-11.

When water reaches 1,000 ppm CH, removing and replacing 1% will drop the CH 8 ppm, if the source water is 200 ppm CH. In a 100,000-gallon pool, the replacement amount equals 1,000 gallons. This will counter the CH added by the daily dose of cal hypo at these concentrations and rates. 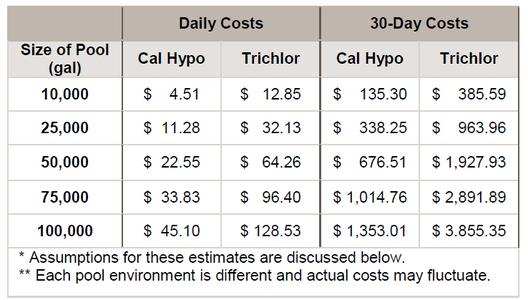 A maximum of 100 ppm CYA is recommended by ANSI/APSP-11, while the Model Aquatic Health Code recommends a maximum of 90 ppm CYA. For indoor pools, CYA is considered unnecessary and is not recommended, according to ANSI/APSP-11.

Minimizing the costs of water and sewage presents a substantial opportunity for pool operators to save money.

Since this water must be drained and refilled, costs go up even more in locations where sewer rates are based on consumption. In those areas, not only would the water costs be six times higher, but sewer costs would be as well.

To compare apples to apples, we assumed that the source water contains 200 ppm CH; the maximum recommendations of CH or CYA had been reached, making it necessary to drain and refill; and the top tier water price had been reached by water consumption not associated with the sanitizer (water cost $0.0100 per gallon and sewage cost $0.0055 per gallon). Water loss due to evaporation, splashout and filter backwashing was excluded.

In addition to changing the calcium hardness or cyanuric acid levels, these sanitizers affect the water’s pH and alkalinity.

Cal hypo contains small amounts of calcium hydroxide and calcium carbonate, resulting in slightly increased pH and total alkalinity. In theory, 10.5 ounces of cal hypo added to a 10,000-gallon pool (adding 5.1 ppm available chlorine) will increase pH by 0.009 and carbonate alkalinity by 0.29 ppm, if the starting conditions of the water were a pH of 7.5, 100 ppm carbonate alkalinity, and 1,000 ppm total dissolved solids, as stated in “Swimming Pool Water Balance — Part 2: Factors Affecting the Calcium Carbonate Saturation Index,” by J.A. Wojtowicz.

Conversely, in the same pool, 7 ounces of trichlor (adding 4.7 ppm available chlorine) will theoretically decrease pH by 0.14 and decrease total alkalinity by 3.3 ppm, under the same conditions, also according to Wojtowicz.