Drunk man who strangled ex-partner until she passed out jailed

When police were called to arrest Wall on New Year's Day, he had got into his Volvo and drove straight at a police vehicle, ramming it and injuring a police officer, before driving off.

He then narrowly avoided two joggers as he sped and swerved between Higher Kinnerton and Lower Kinnerton, before he crashed his car into a hedge.

Judge Niclas Parry said Wall had caused "real fear" to his former partner, "wanton damage" to her property, had injured her and a police officer and put himself "at serious risk" of injuring others with his driving.

"You were out of control due to your abuse of alcohol," he added, as he jailed Wall for two and a half years for assault causing actual bodily harm, criminal damage and two counts of dangerous driving.

Prosecuting, James Coutts said Wall and his victim had been next-door neighbours in Ffrith, and had been in a six-week intimate relationship, which was "not appreciated" by other members of her family.

On August 30, 2021, there had been a street party, and Wall had been confrontational with one of the victim's daughters, and an argument had taken place.

The victim had gone to her garden to the inflatable hot tub, but was alarmed to see Wall "carrying a large log over his shoulder", and she was worried he was going to drop the log in the hot tub.

Wall began punching the garden fence and the victim went inside to be with her daughters and locked the doors.

She heard loud banging noises and it sounded like the defendant was trying to punch his way through the wall.

He then climbed over the fence and shouted he was going "to come in with dogs" and made threats to kill.

The victim wrapped her eight-year-old daughter in a duvet and took her into the bathroom, as she was afraid what Wall would do. While there, they were physically sick with fear as they heard what sounded like power tools from outside.

Police arrived and saw the inflatable hot tub had been damaged, as had a gazebo and the fence, while a whisky bottle had been smashed against the house.

Wall was arrested and he was verbally abusive to officers.

Between Christmas and the new year, the victim had come into difficulty with a dog, and Wall came around to help her. 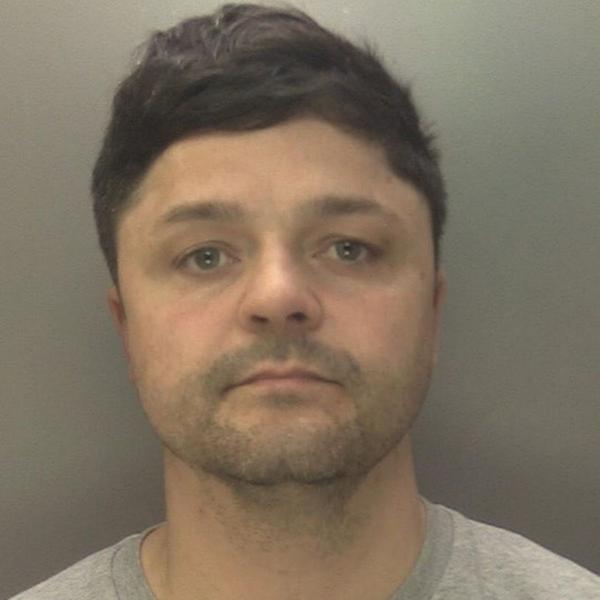 It was on New Year's Eve when Wall came around and it was clear "he had been drinking". Although he initially seemed fine, he became stroppy, sick, was stumbling and fell down the stairs.

The victim was concerned at his strange behaviour and went to speak to him as he sat on the sofa.

Wall then took hold of her by the neck and went on top of her, strangling her until she passed out. The victim said she feared she was going to die.

The victim regained consciousness and went to her daughter's bedroom, screaming for help.

A neighbour came around to help but Wall had left.

Police were called and found Wall a short time later. Wall drove his car at a police vehicle and rammed it, turning it around 60 degrees.

A police officer had to take avoiding action and injured themselves in the process, while a police officer used a baton to try and smash the driver's windscreen.

Wall broke through and drove off, with police in pursuit.

An off-duty officer between Higher Kinnerton and Lower Kinnerton saw the car clipping a kerb as it sped between the two villages, swerving out to avoid hitting two joggers, driving on the wrong side of the road before crashing into a hedge.

Wall was said to be "very drunk and agitated".

A victim statement said she felt injuries to her windpipe and elsewhere which left her struggling to speak and do simple tasks.

She had had difficulty sleeping, dizziness, nausea, and there were "constant reminders" of what had happened around the house.

Wall had 18 previous convictions for 33 offences on his record, including dangerous driving and violence, but no offending since 2015.

Defending, Anna Price said Wall had been drinking for 12 hours before the new year incident, and was "extremely sorry for the distress" caused, adding the victim "could have whatever she wants" in relation to a restraining order.

He had mental health issues, including PTSD, and had symptoms of intermittent explosive disorder, but had yet to be formally diagnosed with that condition.

He recognised he needed help as he felt there was "something wrong with him".