The Ronto Group announced that just 17 reservation opportunities are currently available at its new Infinity luxury high-rise to be built by the award-winning developer in partnership with Wheelock Street Capital at The Colony in Pelican Landing in Bonita Springs.The 22-story tower will include 96 residences ranging from 2,950 to 3,915 square feet.Five spacious floor plan choices are included in the Infinity offering.To date, Ronto has processed 65 reservations worth $178,295,000 at Infinity and 68% of the building has been reserved.Pre-construction pricing for the tower’s available residences ranges from $2,030,000 to $4,200,000.The Colony is situated just west of Highway 41 on the waters of Estero Bay. Infinity is the first of two high-rises Ronto will be building within the gated Colony community and will be the first new high-rise built at The Colony in six years.

Infinity’s open concept floor plans feature three bedrooms plus a den with three and a half baths or four bedrooms plus a den with four and a half baths.The south and west facing 01-residences offer 3,890 square feet under air with four bedrooms, four-and-a-half baths, and a den that provides an ideal setting for work, reading, or television viewing.A private elevator lobby opens to an interior foyer that leads to a gourmet island kitchen that features an undercounter wine cooler, the grand salon, and a large dining area.The grand salon, owner’s bedroom, and the den open to a 935 square-foot terrace that wraps around the corner of the building.The owner’s suite includes two large walk-in wardrobe spaces, a bathroom with separate water closets, his and her vanities, a soaking tub, and a walk-in shower. The three guest bedrooms include private bathrooms and open to a southeast facing terrace.Five 01-residences priced from $2,650,000 to $4,200,000 are currently available for reservation.

The 3,280 square feet under air 02-floor plan features a private elevator lobby and an interior foyer that provides a warm note of welcome.The three bedroom plus den, three-and-a-half bath plan also includes a grand salon, a dining area, and an owner’s bedroom that open to a 780 square-foot west facing terrace.The island kitchen offers an additional gathering place while entertaining and features an undercounter wine cooler.A walk-in pantry is also included.The owner’s suite includes a spacious walk-in wardrobe space, and a bathroom with separate water closets, separate vanities, a soaking tub, and a walk-in shower.The two large guest bedrooms include private bathrooms and open to a northeast facing terrace.Four 02-residences currently priced from $2,030,000 to $3,160,000 are available for reservation. 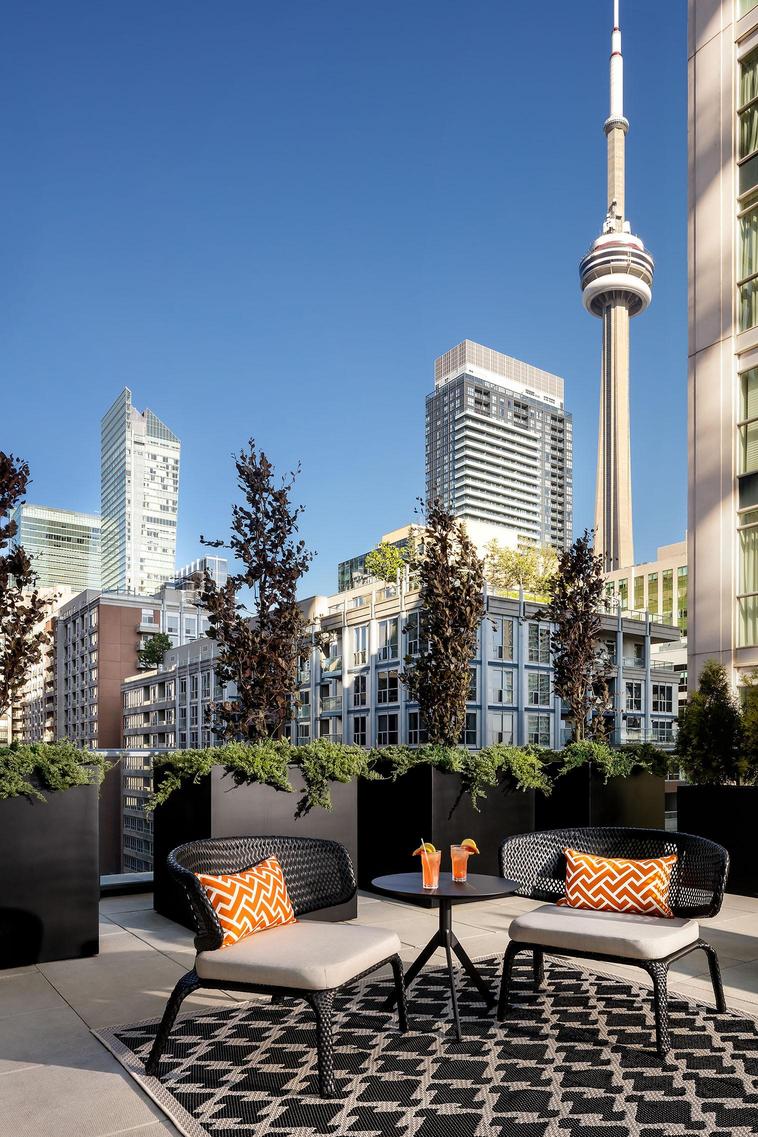 Designed by architect Robert M. Swedroe, the Infinity residences will showcase spacious open concept floor plans with long-range water views and an array of luxurious features and finishes that will establish a new standard at The Colony. A comprehensive array of resort-style amenities that reflect Ronto’s commitment to providing a luxurious lifestyle at Infinity will feature a beautifully landscaped exterior amenity deck with multiple swimming pools, including a 3,400 square foot family pool, a 2,500 square foot adult pool, and a volleyball pool. Hot/cold plunge pools are also planned. An approximately 2,000 square foot game room, bocce courts, pickleball courts with noise buffering screening and spectator benches, a children’s playground, social seating, overlook terraces, and a nine-hole putting golf course will also be included. The amenities will be expanded to include second nine-hole putting course and a dog park during construction of the second high-rise.

Coconut Point shopping center is located just 1.5 miles from the entrance of The Colony and features a variety of shopping and dining options. The community is situated just a short drive from the Fort Myers Airport (RSW) and is also close to two emergency rooms associated with Lee Memorial Hospital and Naples Community Hospital (NCH).

The Ronto Group has established a legacy of excellence that spans more than half a century. The company has emerged as the most active luxury condominium developer in Southwest Florida.Ronto’s two new high-rises within Bonita Bay have redefined the high-rise living experience in Southwest Florida. The completed and sold out 27-floor, 120-unit Seaglass high-rise tower features open-concept tower residence floor plans, luxurious finishes, common areas with a more contemporary, on-trend look, and an amenity rich lifestyle. Omega is a new 27-floor high-rise tower being built by Ronto and will be the final luxury high-rise tower built at Bonita Bay. Construction is on schedule for completion in 4th quarter 2022. The Omega tower will feature 67 residences, including 63 tower residences and four penthouses.The residences will feature views of Estero Bay and the Gulf of Mexico.

To learn more about Infinity at The Colony, visit infinitycolony.com. To make a sales appointment, call 239-362-9550.The Infinity on-site sales center is expected to open late first quarter of this year.