There are times when we expect a lot from a motorcycle, even before swinging a leg over; it’s especially true for the ones wearing the Ducati Monster nameplate. After having experienced the involving Monster 821 and the smaller yet entertaining Monster 797 in the past, my expectations from the all-new Monster were sky high. Even more after reading Rishaad’s experience about riding it on a racetrack. Will the new Monster formula be an improvement on our streets?

Easy on the eye

This fresh new Monster raised quite a few eyebrows when it first broke cover, because the Ducati Monsters used to stand out for beefy, street brawler design. The new Monster is quite a departure from tradition, almost as if it hit the gym for a toned, chiselled look. Whilst a few Monster purists may scoff at the sight of this motorcycle, in reality and out on the streets, this is a good looking machine.

Our test bike’s matte grey paintwork contrasts beautifully with the blood red wheels. The optional flyscreen crowning the oval LED headlight is a nice touch, while the fuel tank adds to the visual mass without being bulky. Occupying pride of place below it is the 937cc L-twin engine, suspended from the new aluminium frame. Add the neat tail section, with the sharply raked twin exhausts, and the Monster becomes a lesson in balanced design.

As is the case with any present-day Ducati, all components, from the body panels, mirror stalks to the crisp 4.3-inch TFT display, exude a sense of premiumness.

If I have to nitpick, the buttons to navigate through the menu are non-intuitive. A simple joystick like we’ve seen on the Multistrada V4 would have made life easier. The projector style LED headlight has a decent spread, but engaging high beam doesn’t light up the road as far ahead as required.

The bigger issue is that despite how good the new Monster looks, it lacks the road presence that the previous bikes commanded. Park it in a crowded lot and the chances that it’ll be lost in the mix are much higher than with the older bike.

While that will be a dealbreaker to some, it isn’t for me because the riding experience has improved by leaps.

Ducati’s decision to build a compact Monster has paid dividends in the way this motorcycle feels off the stand. With a substantial 18kg shaved off the previous bike, it is notably lighter and devoid of a top-heavy feeling. In fact, with the rider’s perch set low in relation to the fuel tank, it gives you a sense of being seated into the bike. This, coupled with the wide handlebar, results in a sporty yet comfortable position, although tall riders will find the foot peg position a bit cramped on longer rides.

On the move, the bike feels light on its feet and there’s a beautiful sense of balance to the chassis. Whether it’s slicing past rush hour traffic or attacking corners up your favourite ghat, the Monster is engaging and how. In fact, the crystal clear feedback that you get from the front end improves your faith in the motorcycle’s handling capabilities, even on roads with undulations.

This is impressive, considering the front fork is non-adjustable and there’s only preload adjustability for the rear monoshock. The magic lies in the suspension being set up to offer a good balance between ride and handling. That being said, the underlying firmness in the suspension does result in the nastier of the potholes making their presence felt.

Helping you extract the potential of the chassis is the L-twin engine whose 111hp and 93Nm figures are enough to keep one entertained. This is a properly quick motorcycle when you give it the beans, with the engine being tractable enough for in-city rideability. 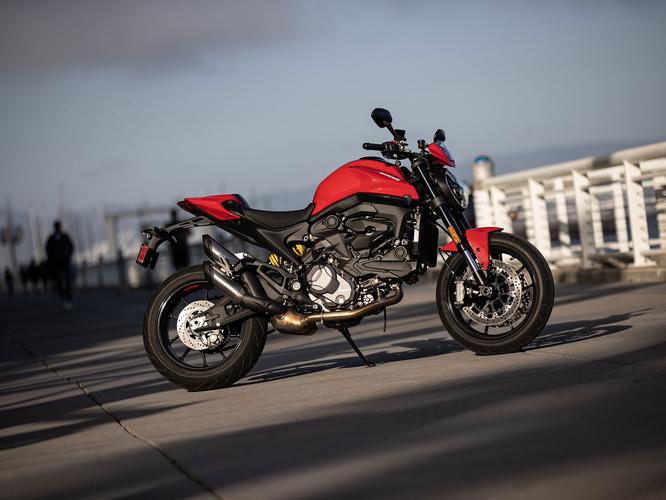 And with a comprehensive suite of electronics, with cornering traction control and ABS in the mix, this Monster is quite forgiving in case one goes overboard.

So much so that even in Sport mode, it’s delightfully fast but not in a manic way. It would appear that in the quest to making it more accessible and meeting current emission norms, the Monster has attained a rather civilised demeanour. Heck, even the sound from the exhaust is largely muted below 2,000rpm. Thankfully, the Ducati bark is present from 4,000rpm onwards.

Brakes are sharp, but not superbike sharp.

This is a big Ducati twin, so it will generate heat, but it didn’t get too unbearable even in slow-moving traffic. However, that may well be a different story when this lovely winter weather passes and Mumbai’s heat returns.

When the time comes to haul the bike down to a stop, the sharp and progressive Brembo M4.32s do a reassuringly great job.

Starting close to Rs 12 lakh (ex-showroom), the Monster commands a premium price tag. Throw in the fly screen and rear seat cowl and that’s around Rs 20,000 more for the Monster Plus. These prices are in Triumph Street Triple RS territory, which is a more powerful bike and comes equipped with fully-adjustable suspension and stickier tyres.

To the ones who think rationally, or want more track-oriented performance, the Brit would be the ideal choice at this price. However, the Italian bike is for those who listen to their emotional side. The Monster is a thoroughly enjoyable motorcycle in every respect. If owning a Ducati streetnaked has always been your desire and you want a bike that’s plenty powerful but easy to ride, the Monster is the one to put the money on.