I’ve been driving California’s Highway 395 since I was a kid, first as a preteen ski racer in the passenger seat of my mom’s Subaru, en route to races at Mammoth Mountain. Later, as a twentysomething ski bum living in Tahoe, I’d drive it with friends for a weekend of backcountry skiing or rock climbing on the eastern side of the Sierra. Now, I head out in a camper van to find deserted campsites, hot springs, and hikes to alpine lakes with my two kids in tow. Every time the car is pointed south on 395, I know good times lie ahead.

Sure, California’s coastline and its iconic roadways like Highway 1 and 101 are gorgeous and get the most attention. But I’d argue that Highway 395 makes for a more adventurous, off-the-beaten-path long-weekend road trip than any other in the Golden State. After all, this is the main access point to the eastern edge of the Sierra Nevada, where the wall of high-altitude peaks looks as dramatic as the Alps from every vantage point along the way.

The highway connects Reno, Nevada, and the Lake Tahoe area on the northern end to Los Angeles on the southern end. From those endpoints, it’s 262 miles. We start our guide and mile-marked road map from the northern point. Along the way, you’ll pass by 14,505-foot Mount Whitney, the tallest peak in the lower 48; Mono Lake, a million-year-old saltwater lake; and plenty of roadside hot springs. This is the best of the West, all on a single highway. Here’s when to drive it, where to stop, and how to find your own path.

When to Drive Highway 395

There’s no bad season on 395. But when you should go depends on what you’re after. If hiking, climbing, or biking are your jam and you don’t want to deal with winter driving conditions, come in summer or early fall, when temperatures are mild and lakes are cool but swimmable.

If you’re a skier, winter and spring are prime time here. You’ve got ski resorts like Mammoth Mountain and June Mountain, both on the Ikon Pass, just off the highway. For experienced backcountry skiers, the terrain in this zone is world class, with steep couloirs and low-angle trees out of the Virginia Lakes and Bridgeport areas and spicy classics like the Bloody Couloir and Dana Couloir farther south, near Mammoth. Keep in mind that the roadway can be snowy and icy from November to April, and many of the neighboring mountain passes that access this road from points elsewhere, like Tioga Pass and Sonora Pass, are closed in the winter.

If you’re heading south, there’s not much in the way of towns after Bridgeport for a stretch, so fill up on gas and load up on burgers and milkshakes at The Burger Barn, a walk-up window with patio seating and tasty waffle-cut sweet potato fries. Buckeye Hot Springs, alongside the scenic Buckeye Creek, is a few miles down a side road from Bridgeport. There’s dispersed camping near the springs, as well as an established first-come, first-serve Forest Service campground at Buckeye Campground (from $20), which is open from May to September. Travertine Hot Springs is just south of town. High Sierra Snowcat and Yurt runs a guided backcountry ski operation out of the Virginia Lakes area in winter, as well as summer backpacking. 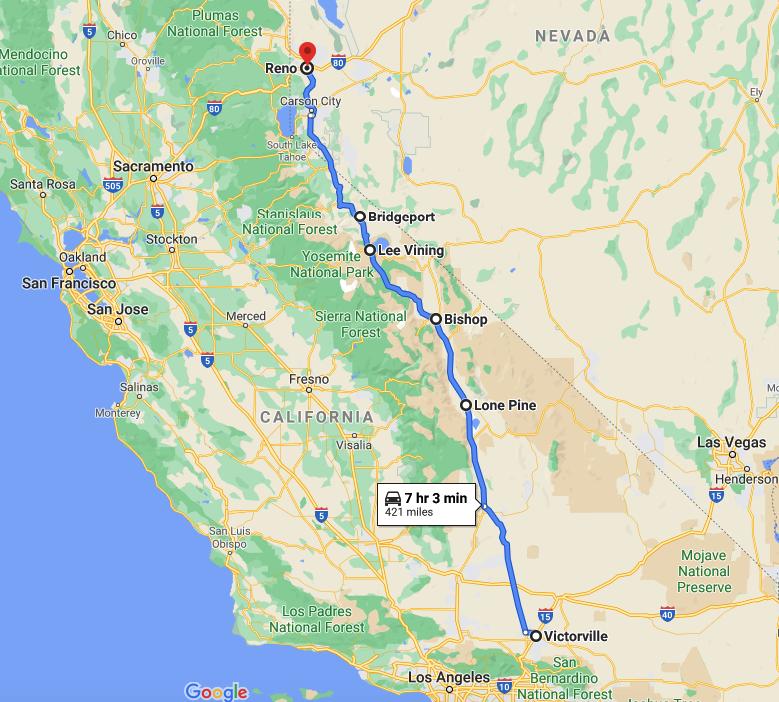 If you’ve ever wanted to see what an actual ghost town looks like, stop at Bodie. Take the ten-mile detour off Highway 395, just south of Bridgeport, to Bodie State Historic Park. This former mining boomtown had its heyday between 1877 and 1881 and was known as one of the wildest and roughest mining camps in the West, until its thousands of former residents fled in a hurry following a fire. Though the incident damaged much of the town, plenty of structures are still intact, like the old schoolhouse, barbershop, and dozens of other buildings.

As you drive Highway 395 south of Bodie, you’ll come down a steep, curvy hill with views of Mono Lake. The landscape looks like it belongs on Mars. Tall calcium carbonate spires rise from the shores of an ancient, mythical-looking saline lake. This 65-square-mile lake is more than twice as salty as the ocean, so if you’re brave enough to take a dip, you’ll float as if on a gravity-free planet, and legend has it the minerals in the water can cure whatever ails you. (Pro tip: Bring a bucket of fresh water to rinse off with.)

Afterward, stop at the Mobile gas station in the town of Lee Vining, where the Whoa Nellie Deli, open only during the summer months, is officially the best restaurant that ever existed inside a gas station. People drive over from Yosemite National Park, 12 miles up Tioga Pass, just for the fish tacos. You can also load up on supplies, souvenirs, or basic grocery items. There’s often live music near the outdoor picnic tables during summer.

For a detour during the summer months (Tioga Pass is closed in winter), the stunning drive into Yosemite is well worth it. Make sure you have a reservation if you’re going into the park during peak season, but if you don’t, there are great day hikes outside the Yosemite entrance gate, like the trails to Glacier Canyon or Fantail Lake, or go for a dip in Tioga Lake, just before the park gates. You can score first-come, first-serve campsites all along Tioga Pass at sites like Saddlebag Lake Campground (from $24) or Junction Campground (from $14). In spring, backcountry skiers flock to this road once it’s open, usually in late May, for skiing lines like Mount Dana or North Peak.

You’re not in a rush, right? Take the scenic way around on the June Lake Loop, a 16-mile drive just off Highway 395 that connects four striking lakes (be sure to stop for the view at Silver Lake) and the quaint town of June Lake. Grab a pint and some tacos at June Lake Brewing. The 3.8-mile round-trip hike to nearby Parker Lake has stellar fall foliage or summertime lake swimming.

The town of Mammoth Lakes makes for a great overnight stop. In summer, ride the gondola to the top of Mammoth Mountain and mountain bike or hike off the 11,053-foot summit. In winter, this volcanic peak boasts 3,500 skiable acres and 25 lifts that access a wide variety of terrain.

In Mammoth, hit up Stellar Brew for coffee and breakfast burritos, Dessert’D Organic Bake Shop for the best chocolate chip cookies in town, and Campo, in the village, for pizza and cocktails. Post up lakeside at Tamarack Lodge (from $119), or head just south of town for quaint lakefront cabins at Convict Lake Resort (from $129).

Natural hot springs are scattered south of town off Benton Crossing Road. Start with tubs like Wild Willy’s or Hill Top. If they’re full, drive around until you find an empty one.

Climbers come to Bishop for the famed Owens River Gorge, a deep canyon over the Owens River that’s packed with bolted sport-climbing routes. There’s also bouldering on the massive house-sized rocks that dot the Buttermilk Range. Sierra Mountain Guides leads guided rock-climbing outings in the Bishop area. Not a climber? Hike to high-alpine lakes like Lamarck Lakes or Sabrina Lake.

Afterward, get in line for a sandwich or a loaf of bread, originally from a Basque sheepherder’s recipe, at Schat’s Bakkery in Bishop.

Lone Pine has been the setting for hundreds of classic Western movies over the years, thanks to its high-desert vibes and not-too-far-flung location three hours from Hollywood. Nowadays, it’s become a destination for climbers set on summiting Mount Whitney, which towers over town. The local climbing and mountaineering store, Elevation, has fuel tanks for your camp stove, climbing gear, or whatever else you need. Start your day at the Alabama Hills Cafe, a hole-in-the-wall breakfast spot with big, gooey cinnamon buns.

Drive up Whitney Portal Road to take in the view of the highest peak in the lower 48. Sierra Mountaineering International leads guided climbs up Mount Whitney, but bear in mind that a summit bid is a big endeavor and requires advance permitting. You can take an easier day hike up a lower section of the Mount Whitney Trail—Pine Lake is 2.8 miles up the trail and makes for a great picnic spot.

Whitney Portal Hotel and Hostel (from $33) has bunks and basic rooms geared toward climbers. Otherwise, the Alabama Hills Recreation Area is BLM land with beautiful, free dispersed camping set among massive boulders with a view of Mount Whitney. There’s also a designated campground at Whitney Portal.

From Lone Pine, the road continues south, with Los Angeles just a few hours ahead.