Puppy Bowl 2022 lineup: Meet the adoptable dogs in the game

They’re competing for first place in the competition — and in our hearts.

America’s beloved Puppy Bowl is back for its 18th year, and its contestants are ready to rumble.

“These are not trained puppies,” long-time Puppy Bowl referee Dan Schachner told The Post. “These are dogs in their purest form.”

But the annual puppy palooza serves a larger paw-pose: to find these furry friends a forever family.

In fact, the Puppy Bowl has always had a 100% adoption rate.

“Every Puppy Bowl ends with every single dog being adopted,” Schachner, who has refereed the big game for 11 years, said. “Our goal is to showcase as wide of a variety as possible.”

At the shelters providing the playful pooches, adoption rates also increase after Puppy Bowl every year, he added.

This year is the largest competition yet, with more than 100 dogs from 63 shelters in 33 states, including a pup from Hawaii. This edition also includes the most special needs dogs the Bowl has ever featured.

There’s only one rule in Puppy Bowl: Drag a chew toy into the end zone. Any other calls, Schachner said, are made up on the fly.

“They’re fast and loose rules,” he said. “Its kind of crazy, but it’s controlled chaos.”

You can watch the pumped-up pups attempt to score a touchdown through Discovery+ or live on Animal Planet this Sunday, Feb. 13, at 2 p.m. EST.

But first, let us introduce teams Ruff and Fluff, who are preparing for the ulti-mutt showdown.

This Hawaiian “star” was born at the Maui Humane Society last year after her mother, who was badly wounded, was brought to the shelter just days prior.

When Hoku was born, the American Staffordshire terrier and Catahoula Leopard Dog mix was timid but sweet after she grew more comfortable, and she was eventually put into a foster home.

That is, until she was adopted right after the taping of Puppy Bowl by the parents of the staffer who fostered her.

“She is extremely intelligent, an incredibly calm and trusting puppy, and uses her hound-dog howl only when appropriate,” said a Puppy Bowl representative, adding that she also loves water. “She really is a special dog.”

This Great Pyrenees and Australian shepherd mixed pup from Operation Paws For Homes is ready to ruff up opponents on the field.

Bimini is a beagle and Australian cattle dog mix from Orange Twins Rescue.

Fire away! This precious toy fox terrier and chihuahua mix from Save An Angel is ready to win it all.

Coming all the way from the Sunshine State’s Miami-Dade County Animal Services, Conchita the dachshund and chow chow is going for gold.

Ellington, from Shaggy Dog Rescue, is a Siberian husky and chow chow mix who’s going to lead the pack to victory.

This cuddly golden doodle hails from Florida Little Dog Rescue — and he’s ready to get some tails wagging on the field.

Tayce’s heterochromia eyes stun as he vies for the trophy — and a new home. From Orange Twins Rescue, this husky and chihuahua mix is starting for Team Ruff.

Surf’s up! This Miami-Dade County Animal Services poodle and miniature American shepherd mix is ready to dive into the game.

This pup may seem as delicate as snow, but Snowball, a chihuahua and miniature pinscher from Wagmor Pets, is determined to bring the team to victory.

Ridley, an adorable border collie from Green Dogs Unleashed, is gearing up to wow on the field, if not with his skills then at least with his ultra-soft fur and piercing eyes.

From Match Dog Rescue, Scotty the shih tzu and chihuahua mix is poised to play for Team Ruff at the Puppy Bowl.

From Green Dogs Unleashed, Pongo the dalmatian is ready to prance and play for the win.

Pops — a border collie and Labrador retriever mix from the Center for Animal Health & Welfare — is ready to ruff-house the opponents on the field.

Moby, a French bulldog from Harley’s Haven Dog Rescue, may look like a sweetie, but he’s ready to battle Team Fluff to be the top dog.

Emmylou is an Australian cattle dog and chihuahua mix from the Anti-Cruelty Society ready to win it all at the Puppy Bowl. 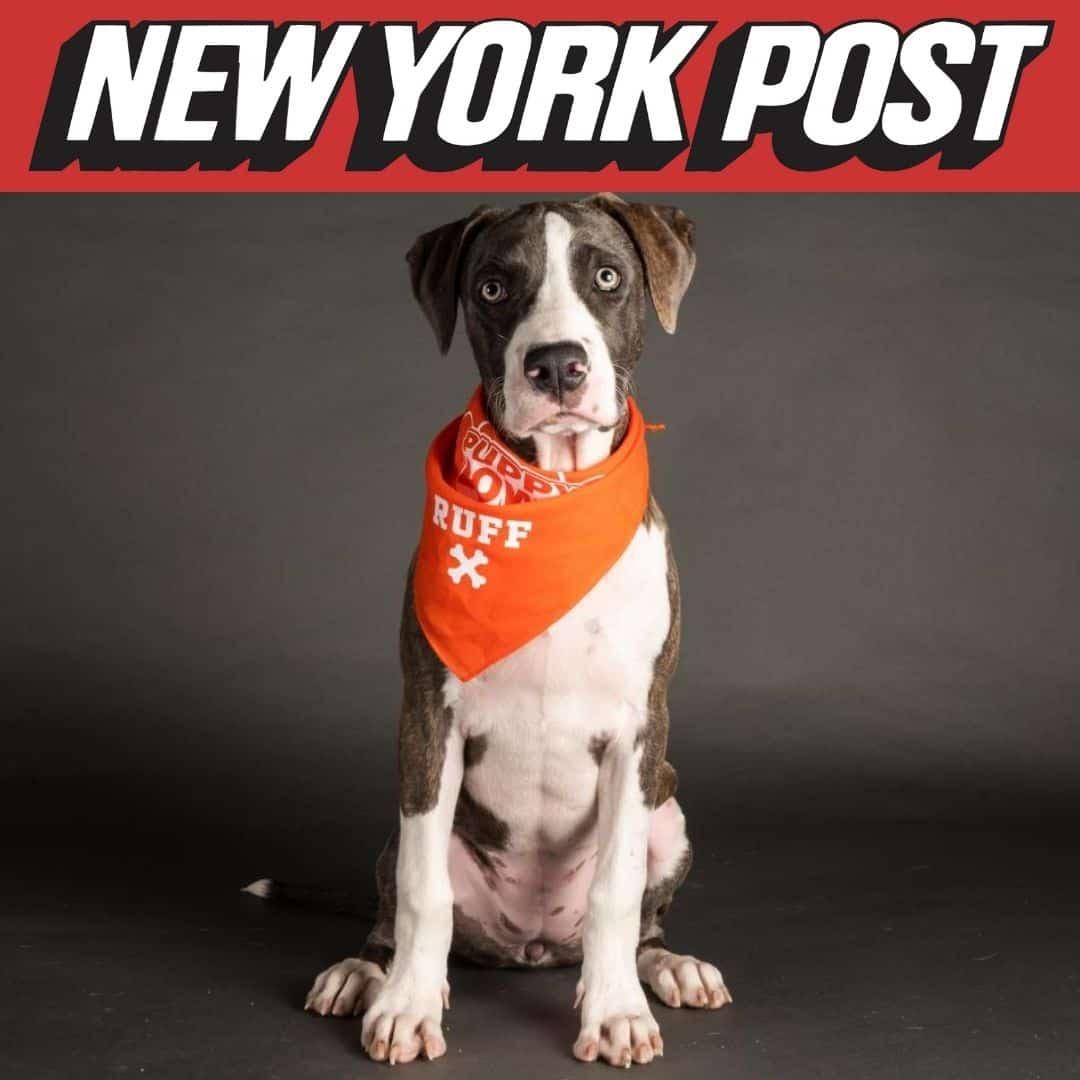 Hailing from the Providence Animal Shelter, Missy the beagle and Australian cattle dog mix is prepping for her big day leading Team Ruff.

Maisie, the dough-eyed chihuahua and dachshund mix from Compassion Kind, is repping Team Ruff on Sunday.

Lovely Luna from the Danbury Animal Welfare Society is a basset hound and beagle mix vying for the prize on the field and in viewers’ hearts.

Lulu, the loveable shih tzu and Pomeranian mix, comes all the way from Pack Leaders Rescue of Connecticut.

Jackson, a Belgian Malinois, is bringing his perky ears and big paws to the field all the way from Muddy Paws Rescue.

In this game, size doesn’t matter. As the smallest pup in the Bowl, this Chihuahua is ready to race his way to a win (especially if treats are involved).

Birch, from Ninna’s Road to Rescue, was adopted on Thanksgiving Day to a family with five kids, two guinea pigs, a dog and a tree frog.

He’s an avid snuggler and passionate about food, even sitting with his family at the breakfast table after running laps to wake them up. He also loves to play with toys — albeit mostly cat toys since he’s so tiny — making his Puppy Bowl outlook promising.

The goal of Angel City Pit Bulls — where Cooper Pupp is from — is to rescue dogs and support the local community by working with local shelters when they’re in need.

For Cooper Pupp, an American pit bull terrier and American Staffordshire terrier mix, he found his way to Angel City Pit Bulls after being at a shelter in south Los Angeles, where he was discovered wandering alone on the streets.

After going into foster care and traveling with Ally Fierke, the director of community outreach for the Puppy Bowl, he found his forever home with a LA family.

A Puppy Bowl representative described him as “a goofy, playful guy who charms all his mom’s coworkers when he goes to work with her.” He also adores the beach and park, and still tries to convince his family he’s a lap dog, despite outgrowing that title.

Wes, from the Sato Project, is a small chihuahua and golden retriever mix who’s ready to play ball.

He’s a Labrador retriever who is enrolled in a pup-in-training program out of Houston, Texas, in partnership with America’s VetDogs, a New York-based non-profit that provides service dogs for free to veterans and first responders with disabilities.

While he lives with a volunteer puppy-raiser, he regularly attends home games and trains in the NRG stadium to be the best, well-socialized pup around.

Benny is a wheelchair-bound poodle from Bosley’s Place, but don’t be fooled — he’s just as quick as the other pooches at play.

Blondie, who lives up to her name with the color of her sleek coat, is a beagle and Australian cattle dog mix from Providence Animal Shelter.

Dinozzo, from Tri-State Basset Hound Rescue, is ready to charm his way to the championship.

The Sato Project’s wonderful Wasabi (no, not the spicy condiment) is ready to wow the crowd.

Zany Ziggy is here and ready to rumble all the way from Rescue City.

This Pomeranian and chihuahua mix may seem like a pip-squeak, but the fluffy fur-ball is anything but. Hailing from Florida Little Dog Rescue, Squeak is coming to cause a ruckus.

This Sammie sweetheart comes from a different beach — the Virginia Beach SPCA — but she’s still ready for some fun on the field.

Forget the human Gronk, this playful pup from Love My Pitties Rescue has the perfect paws to be the better tight-end.

Raspberry looks as sweet as her namesake, but don’t be fooled — she came for the win. The puny pup comes from the Shaggy Dog Rescue to compete for Team Fluff.

Look at all that chocolatey goodness! Pudding, a Labrador and American pit bull terrier mix, comes from the Rutland County Humane Society.

Much like the food, Nugget’s moves on the field are crisp, and the Pembroke Welsh corgi traveled all the way from Florida Little Dog Rescue to take home a win.

This shih tzu and Pekingese mix is up for adoption at Shih Tzu & Fur Baby Rescue, and is looking for a win on Sunday as well as a forever family.

It’s Mario time! Coming from the Sato Project, this cuddly canine was born to play games — and win.

Kali, a mixed breed pup from Lifeline Puppy Rescue, has the perfect puppy dog eyes — but is it enough to take home gold?

Look at this distinguished gentleman. Irwin, a chihuahua and American put bull terrier mix from the Sato Project, is patiently waiting for a win for Team Fluff.

Firework, a chihuahua and poodle mix from the Helen Woodward Animal Center, is about to have sparks flying on the field.

From Green Dogs Unleashed, Glaze is a chow chow and Alaskan malamute mix ready to make a few touchdowns.

Brought to the Puppy Bowl by Virginia Beach SPCA, Heidi seems timid but she’s prepared to paw her way to a prize.

Last but not least, Forrest, a fetching mastiff and cane corso mix from Brandywine Valley SPCA, can only see out of one eye, but is leading his team to triumph just the same.