CLE ELUM, Wash. — Work is proceeding in the Yakima River Basin to prepare for climate change and the loss of snowpack.

On the Kittitas Reclamation District, the construction of plastic-lined irrigation canals is in full swing.

The district, formed in 1911 with roots dating back to the 1870s, is trying to stop as much precious irrigation water from leaking out of its network of canals as possible. Leaks have accounted for up to 30% of its water allocation.

“It is becoming more alarming to us that we need to continue to work as fast as we can to implement conservation measures like this,” said Urban Eberhart, manager of the Kittitas Reclamation District (KRD).

The work is part of a broader effort to keep and store water that climate scientists expect will keep coming as rain, even though less and less of it will be stored as snow. The University of Washington’s Climate Impacts Group, part of the College of the Environment, forecasts the state’s projected snowpack will decline 70% by the 2080s, relative to the historic averages between 1916 and 2006.

“For the Yakima Project, we rely heavily on snowpack, and usually call it our sixth reservoir,” said Wendy Christensen, a civil engineer by training who works for the Bureau of Reclamation, the Federal agency that manages water around the west.

With snowpack expected to melt away with climate change, more ways are being considered to store what would have been in that “sixth reservoir.”

If you’ve crossed Snoqualmie Pass on Interstate 90, you’ve seen a piece of the Yakima Project. It's the long lake on the south side off the interstate known as Keechelus Lake. It’s used for recreation, but it also holds water to irrigate farms in the Yakima Basin.

The Bureau of Reclamation estimates that out of the state’s annual agriculture output - around $10 billion - nearly $450 million is grown in the Yakima Basin, which encompasses all or part of four counties.

“We live in a rain shadow, so we get maybe five to seven inches a year,” said Christensen. 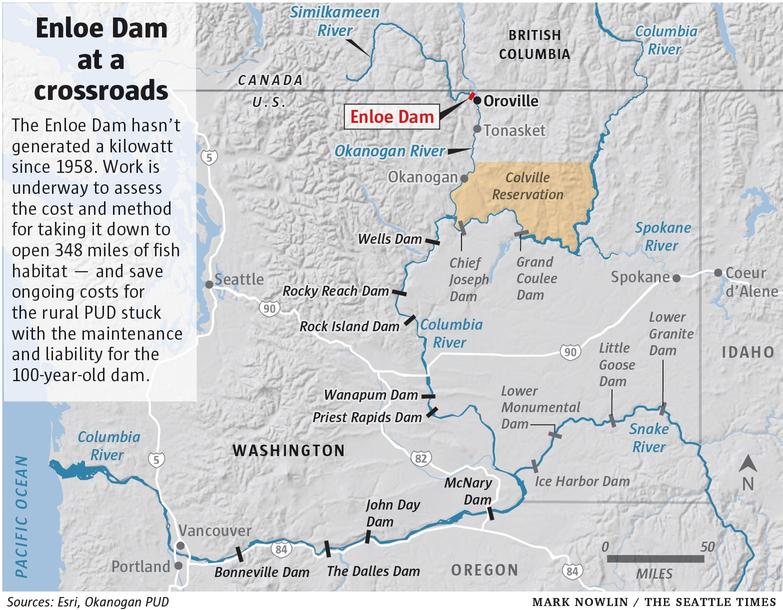 These are just pieces of what’s called the Yakima Integrated Plan. The Washington Department of Ecology places the cost at $4.1 billion. Christensen estimates it as a range from $3 bill to $5 billion, depending on what gets built.

The Yakima Integrate Plan is also designed to bring back salmon and other fish including endangered bull trout. KRD estimates salmon runs can be boosted from less than 25,000 fish to over 300,000 by “improving fish passage to the Yakima Basin’s headwaters and restoring river and stream habitat.”

In 2013, the irrigation district helped the State of Washington acquire private forest land called the Teanaway Community Forest, named for a key river flowing into the Yakima River at Cle Elum, which is also a fish hatchery run by the Yakima Nation.

On the Naches River system, a much smaller Bumping Lake could also be raised and expanded.

The moves are not without controversy, with private property owners raising concerns about lake levels getting too high or too low. Lakes such as Kachess would only be too low during a major drought, according to the Bureau of Reclamation.

Then there’s the creation of a new reservoir, which would connect to the Yakima River in the Yakima Canyon at a place called Wymer in Kittitas County. A Wymer lake would create another 162,000-acre-feet.

“We’re looking at needing about 450,000-acre-feet of storage just to shore up our existing needs,” said Christensen.

During drought years, farmers who have “junior water rights” can have their water allocations cut dramatically. Christensen said that in 2001, farmers barely received more than one-third of their water, 37%. That can mean death for a big investment like apple orchards, where dead and dying trees are pulled out.

The Yakima Integrated Plan should help that.

“We’re looking to getting them up to 70% of their supply, which for them would be a survivable drought, it would not be ideal,” Christensen said, adding that farmers would have enough water to where they’re not having to pull out trees.

It could take three decades to fully implement the Yakima Basin Integrated Plan, but in numerous places, that work has already started.

“You are looking at a climate adaptation strategy in effect right now,” said Eberhart. “We are preparing for a future without snowpack.”