Keep it flowing: Protecting your plumbing when the weather gets cold

As the freezing temperatures roll in, it’s a good time to make sure the pipes and faucets of a home are properly protected from winter frost.

Mike Radder with Word of Mouth Services Inc. in Moses Lake said now is the time of year to make sure garden hoses are disconnected outside a home every night.

“A lot of people come over here from the coast and leave their garden hose on and we’ll have a heavy frost overnight and they won’t even know it and it’ll freeze and break,” Radder said.

Radder said a lot of homeowners will get hit with a quick freeze in the fall and not even know they’ve had a line break. Making sure all outside orifices on a home are properly sealed is a great way to protect the plumbing underneath a home. Covering up vent covers is key, particularly those facing winds from the north.

Radder said he’s been under homes, watching as frost blows in from the north, causing the copper pipe underneath the homes to split after freezing.

“When it gets to negative 10 degrees and that wind comes out of the north, I know I’m gonna have a day of nothing other than emergency water line repairs,” Radder said. “We won’t even be able to answer all the calls.”

If all vents and faucet spouts are closed off before winter, he said they should be fine. For homeowners in rural areas with pump houses, he said now is a good time to ensure the heater is working with the pump house free of any fire hazards.

Radder said a battery-powered temperature alarm is a good idea, too, in the event of a power outage or surge. He said he’s seen digital alarms reset after a power surge and not turn back on, causing a pump house to freeze over with everything destroyed in just a matter of hours.

In addition to protecting against the incoming cooler temperatures, Radder said spring and fall are good times to flush out a water heater of sediment.

Radder said even he’s guilty of not doing this on a regular basis, but he has the training and know-how to fix an issue if one were to arise. He said it’s a good idea to hook a hose up to the bottom of a water heater and flush out any sediment buildup, as calcium can build up inside. 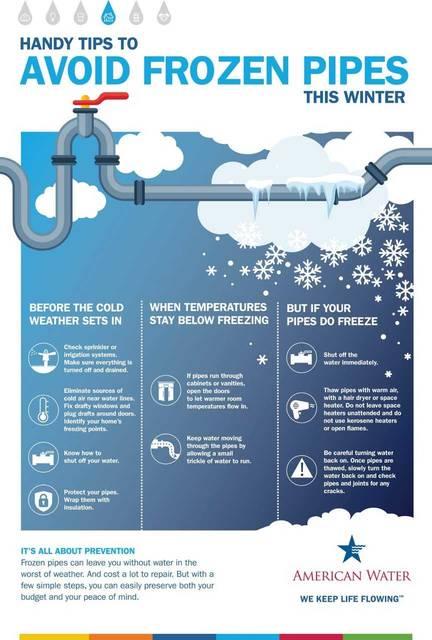 “It envelopes or covers the bottom element, insulates it and burns the element out,” Radder said.

Spring and fall are often the times of year when he said he sees the most issue with root intrusion in systems, as trees look to soak up extra nutrients before the winter. Radder said he recommends using any root kill or root intrusion product approved for the pipes used in a home.

An inspection with a sewer camera can help enlighten a homeowner if root intrusion is an issue. If someone is concerned about a break in their line allowing roots, adding a root kill additive to the system once a year will generally help with the issue if it isn’t too severe.

While roots are an issue this time of year, Radder said kitchen lines are always the primary ones in which people have issues with clogging, primarily because of food grease buildup. If a homeowner is on a septic tank, he said adding in anaerobic bacteria to the tank can help reinforce the bacteria that helps fight food grease buildup.

He said he does not recommend using any acid-based products whatsoever, as they can be extremely catastrophic to pipes. Another thing he said to avoid is adding things, such as chlorine tablets to the back tank of toilets.

“Those things just sit and barbecue the plastics; they super-oxidize them and your flapper will go to crap radically quicker, like a tenth of its lifetime,” Radder said.

Flushing out a water heater on a semi-annual basis can help prevent the building of calcium on the unit, which can cause it to burn out quicker.

Mike Radder said kitchen sinks continue to be the spot he sees the most drainage issues and clogging, mostly due to the building of grease within the pipes.

Flushing the sediment out of a water heater by connecting a hose to the bottom of the unit twice a year can help protect the unit from being burnt out due to buildup of calcium.