If something’s already pretty good it doesn’t need a radical redesign, and that’s the story with the refreshed 2022 Subaru Forester.

It gets restyled front and rear bumpers, grille, and headlights; a tweak to its suspension to improve handling; and an updated version of its advanced safety systems; otherwise, it’s much the same as before.

The Forester features a cohesive design. It isn’t spectacular, but it’s handsome. It looks a bit top-heavy because of its tall windows, especially with the chrome surround on the Limited and Premier trims, but the payoff is superb visibility all around.

In addition to the styling tweaks given to all trims, the Premier further gets new fog lights and silver roof rails. The base wheel size is 17 inches, while upper trims get 18-inch ones of varying design. That’s a bonus in a segment where wheels often go to 19 or 20 inches, making winter or replacement tires pricier.

The Forester gets the top five-star crash-test rating from the United States National Highway Traffic Safety Administration (NHTSA), but in testing by the Insurance Institute for Highway Safety (IIHS), the 2022 model loses the Top Safety Pick+ designation it earned for 2021. That’s because the IIHS changed the side crash test to mimic being hit by a large SUV. The Forester gets the top “Good” rating in everything else, but only earns “Acceptable” in the revised test.

All trim levels have a camera-based set of driver-assist technologies that includes emergency front braking, adaptive cruise control, and lane centring. For 2022, the Forester receives an electric brake booster, which improves the emergency braking.

As with other entries in the segment, some technologies are only on higher trims. Emergency rear braking is on the second-from-entry Convenience, and then another step up to the Touring adds blind-spot monitoring with rear cross-traffic alert. The Limited and Premier include a driver monitoring system that detects if you’re not watching the road. All trims include the rearview camera that’s mandatory on new vehicles, but even better, the Forester’s includes a washer to keep it clean. 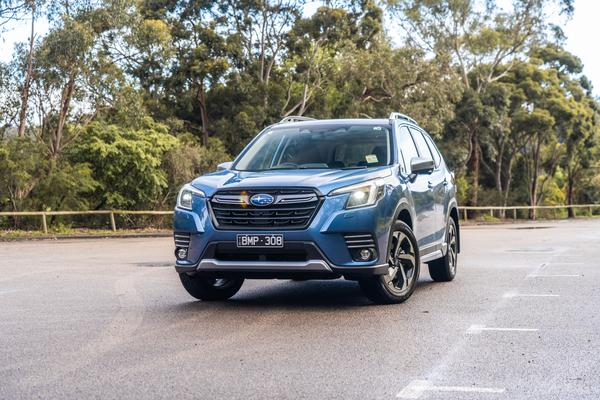 Some automakers are stuffing numerous functions into the centre screen, requiring you to look away from the road to find them, but the Forester is refreshingly simple. Even in the top-level Premier, the dual-zone automatic climate control has dials for temperature and fan speed, as it should be. Everything is backlit, including the mirror switch, which often isn’t illuminated.

The infotainment system has dials for stereo volume and tuning, and hard buttons to bring up the screens for each function. Once you do, the icons are large and intuitive. The system’s graphics look a little dated, but it’s a fair trade-off for the simplicity and reduced distraction.

It’s easy to get in and out of the Forester; visibility is excellent; and the wide rear opening and low liftover makes it easy to load in your cargo. If the items you’re carrying are longer than the 908-mm (35.8-in) length of the cargo compartment, the rear 60/40 seats fold almost completely flat for more space. Towing capacity is limited to 680 kg (1,500 lb), although the new Wilderness can pull up to almost double that.

The Forester is roomy, with generous legroom in both rows, and decent headroom for all occupants as well. A power driver’s seat is standard on all but the base trim level, while the Limited and Premier add memory settings, a power passenger seat, and leather upholstery. The heated seats have two settings and they get quite warm, as does the heated steering wheel. The retuned suspension gives it a smoother and quieter ride, adding to the Forester’s overall comfort.

All Forester models are powered by a 2.5L horizontally opposed four-cylinder engine that makes 182 hp and 176 lb-ft of torque. It isn’t tremendously powerful, but then, that isn’t really the point here. Instead, acceleration is smooth and linear, and it has enough for passing power on the highway.

That power goes to all four wheels through an automatic continuously variable transmission (CVT), which does its job efficiently and quietly. Paddles on the steering wheel let you manually shift through seven simulated “gears” if you choose. You can also select between drive modes that adjust the throttle and driveline for sport and sport sharp settings, although they mostly make more noise than feeling truly sporty.

The Forester has responsive steering, handles smoothly around corners with a minimum of body roll, and brakes confidently. It’s as you’d expect in this segment – more utility than sport, but that’s OK.

All-wheel drive is standard on all trims. Subaru calls it “symmetrical,” which sounds like equal power to each wheel, but it’s actually the symmetrical design of the system. Under normal driving, 60 per cent of torque goes to the front wheels and 40 per cent to the rear, but the system can distribute more or less between the axles when traction is required.

Many competitors run primarily in front-wheel drive and send power to the rear as needed. That works, but I find Subaru’s system to be more surefooted in adverse conditions because all wheels are always powered. (Of course, you still need winter tires for the full effect.)

The Forester also includes X-Mode, which adjusts the engine, transmission, all-wheel system, and brakes for tougher conditions. It’s not a true off-roader, but it will get you over rougher terrain. The top four trim levels have “dual mode” X-Mode, which has settings for dirt/snow, and for deep snow/mud.

Even driving all its wheels all the time, the Forester compares favourably to most of its non-hybrid SUV competition. Against the Subaru’s 8.2 L/100 km in combined driving, the Nissan Rogue does better at 7.7, and the Honda CR-V at 8.1; while the Toyota RAV4 comes in at 8.4, and the Hyundai Tucson at 9.0 L/100 km.

The Forester also compares favourably with its rivals (equipped with all-wheel drive) on price. Starting at $31,295 including destination, it undercuts the Rogue, CR-V, RAV4, and Tucson on their freight-included starting prices, and only the Tucson in its highest trim is less than the Forester’s top price. I’d most likely choose the Limited, a step down from my tester. It includes all the features I’d like, but without paying extra for what mostly amounts to appearance differences on the Premier.

I’ve always liked the Forester, and this mild makeover is well-done. It doesn’t touch what didn’t need fixing, but it brings a smoother ride and better looks. There’s a lot of competition in this segment, with some very good rivals, but Subaru definitely has a contender.