Police have vowed to crack down on flood looters after a Queensland man allegedly raided a convenience store and stole a large amount of fishing bait.

The 22-year-old man from flood-affected Goodna, in Ipswich, was caught by police kayaking through floodwaters carrying the bait products after allegedly robbing the Brisbane Road store.

Watch the alleged Queensland flood looter being nabbed by police above

He has been charged with entering a premises to commit an indictable offence.

Police also allege a charity story in Bundamba, also in Ipswich, was robbed of jewelry and cash, while in a separate incident valuables were stolen from a Blackstone home while the residents were evacuated due to floods.

Police Commissioner Katarina Carroll also said she was “disappointed and disgusted” by the looting, while Police Minister Mark Ryan also slammed the behaviour.

“Queenslanders support their mates, and if you’re thieving from them, you’re not a Queenslander, you’re a grub,” Mr Ryan said.

More police, including plain clothed officers, will be deployed to monitor flood-hit areas in south-east Queensland.

On Tuesday afternoon, the first fatality was confirmed as a result of the floods in northern New South Wales.

The woman in her 80s, who was found dead inside her Lismore home, has not been formally identified.

A ninth person has died in the state’s disaster, with the body of a 76-year-old man found in his car submerged in floodwaters in Glen Esk in the Brisbane Valley.

He had been missing since Sunday when his car went into water on the Brisbane Valley Highway.

On Monday, the northern NSW town of Lismore was hit by the worst flooding on record, with water levels reaching around 14.5m on Monday afternoon - 2m higher than the previous record set back in 1890, although not as high as the 16m expected.

Thunderstorms, heavy rain and damaging winds are now expected to move south along the NSW coast towards Sydney, bringing some relief to thousands impacted by flooding in the state’s north.

A “Mud Army” of volunteers is primed to mop up once flood waters that have killed eight people and damaged thousands of homes and businesses recede.

There are also about 200 Defence Force personnel on standby to provide support to the Queensland government’s recovery efforts.

However, the Bureau of Meteorology has warned severe thunderstorms are set to return this week, complicating the epic task. 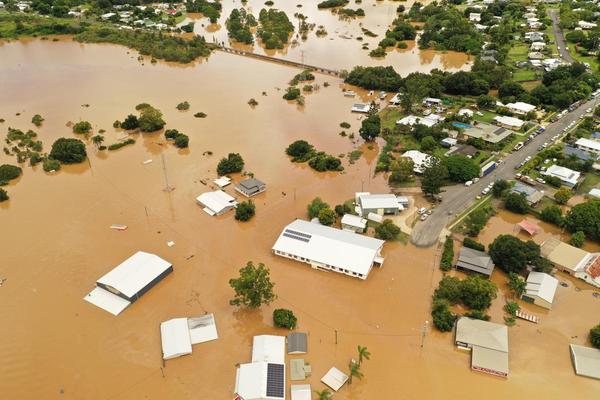 “They can bring heavy rain and damaging winds and large hail that will continue to impact the recovery efforts ongoing through southeastern parts of Queensland.”

The Brisbane River peaked at 3.85m on Monday, below the 2011 flood peak of 4.46m, and is set to rise again at high tide on Tuesday evening.

On Monday, the death toll of the floods rose to eight when a man and his dog died after their car washed away in floodwaters in the Currumbin Valley on Monday morning.

It’s believed the car was driven 30 to 40m into flood waters.

There are also “grave concerns” for two men missing in floodwaters in inner Brisbane and at Glen Esk.

Graceville resident Kisha Werba told 7NEWS on Tuesday morning of her heartbreak after her property was submerged by floodwaters.

“But the community have been insane, it’s fantastic everyone has come down the street to check in on each other and see if anyone needs help.”

Panic buying and looting sets in amid chaos

Premier Annastacia Palaszczuk addressed the media on Tuesday and blasted the looters plundering properties in Ipswich, Goodna, Blackstone and Bundama.

“I cannot believe that people would go to these depths,” she said.

“If you’re thieving from them (people whose homes have flooded), you’re not a Queenslander, you’re a grub,” he said.

On Monday night in Brisbane’s West End, supermarket shelves were also stripped bare amid the panic with locals stocking up on essentials such as toilet paper, tissues, meat and poultry.

It’s believed road and rail disruptions in the area are further adding to the problem at supermarkets.

There were blue skies over much of the region on Tuesday morning but major flooding is under way on the Brisbane, Logan, Bremer and Mary rivers, and Warrill Creek after the torrential downpours of the past week.

Meanwhile, on Tuesday afternoon, the first death from the devastating deluge in northern NSW was confirmed when the body of the elderly was found inside a home inundated by floodwaters in Lismore.

The woman’s body was found by a concerned neighbour who reported it to police.

NSW Premier Dominic Perrottet announced on Tuesday national disaster declarations have been made for 17 council areas in NSW due to the severity of the floods.

“They will provide immediate financial support for those people who need it, and in addition, it ensures that financial support with the state and federal government is there to help our communities get back on their feet, as the rivers subside,” Mr Perrottet said.

Hundreds of people across the region were stranded for hours on rooftops amid the crisis as state and federal emergency services struggled to access impacted areas.

There are still fears for hundreds of people who have been displaced after the floods on Monday.

There were 17 evacuation orders in place across the state’s north on Monday while 21 areas were under evacuation warnings, covering around 62,000 people.

Evacuation orders were in place for residents in the following northern NSW towns on Tuesday:

A Public Information and Inquiry Centre has been activated to provide information to the public and to answer inquiries about the flooding. The centre can be contacted on 1800 227 228.