How to unclog a shower drain – easy solutions and pro tricks

Standing in a pool of water each time you take a shower? Knowing how to unclog a shower drain will save you from waiting for a plumber to sort out your problem – and the cost that comes with calling someone in rather than doing it yourself.

Over time, hair and soap scum can block the shower drain with the result that the water from the shower doesn’t drain as it should, and fills the pan instead. Standing in scummy water doesn’t make showering the refreshing experience it should be, and leaves the pan gunky afterwards – and you know your problem is only going to get worse with the overflow of water on to the bathroom floor a potential consequence.

While being savvy about how to clean a shower thoroughly is going to help keep the drain clear, unclogging can be a necessary – and only mildly icky – task. Hot water, or baking soda and vinegar can come to your rescue, and you can take the advice of the experts and use a snake or plunger, too. The lowdown? Right here.

How to unclog a shower drain

You might be wondering why the problem of how to unclog a shower drain comes up so often. ‘Showers are particularly vulnerable to clogs because the hair that goes down the drain sticks to the soap scum and creates a very strong barrier – almost like rebar does with concrete,’ explains Enoch Heise, licensed journeyman plumber and trainer for Legacy Plumbing of the Dallas area.

‘What makes this worse is that showers drain with only a steady trickle and not with the rush of a draining tub.’

The problem can be solved, though, and these are the options.

1. How to unclog a shower drain with standing water using boiling water

If the clog is a mild one, boiling water could provide a solution to the problem of how to unclog a shower drain.

‘If you don’t want to use harsh chemicals, you can get a great result pouring boiling water down the drain slowly and waiting to hear the gurgle,’ say the experts from Victoria Plumbing.

So, yep, hot water, just off the boil, could unclog the drain. How many times you will need to repeat this method depends on the extent of the blockage. Once may be enough, but repeat until the water passes through without leaving any standing water.

1. Fill a large saucepan or teakettle to the maximum amount with water.

3. Slowly pour the water down the drain.

‘Pour it down the drain in two or three stages, allowing the hot water to work for several seconds between each pour,’ advises Aaron Mulder, co-owner and operations manager for Mr Rooter Plumbing of San Antonio, a Neighborly company.

Note: this is fine for metal pipes but not for PVC.

2. How to unclog a shower drain with hair using a plunger

A plunger, much like you'd use to unblock a toilet, can also come in useful when you’re wondering how to unclog a shower drain. ‘When used properly, the flat cup works to create a vacuum over the drain and dislodge the clog at hand,’ explains Aaron Mulder.

1. Remove the drain cover and apply petroleum jelly to the plunger's edge – this will help secure the seal.

2. Put the plunger cup over the drain opening and run the shower until enough water covers the lip of the plunger.

3. Next, quickly move the plunger rapidly to bring up the clog. You may have to do this for several minutes.

4. Test run the shower to see that water flows down smoothly before reattaching the drain cover.

3. How to unclog a shower drain with a snake or a wire hanger

Ask a plumber how to unclog a shower drain and you can be sure they will advise the use of a plumber’s snake, also known as a drain snake, to locate and remove the clog once and for all.

‘We highly recommend using a drain snake to naturally unclog your pipes,’ says Catherine Keo from The Original Plumber. ‘If your clog is due to soapy hair or other residues, a drain snake can pull the buildup out without the need for chemicals. You should feel the auger hit the clog so you know it's working.’

If you don’t own a tool, you could improvise using a wire hanger. It is, though, very important not to damage the trap if you use this method.

We recommend you wear gloves doing this. 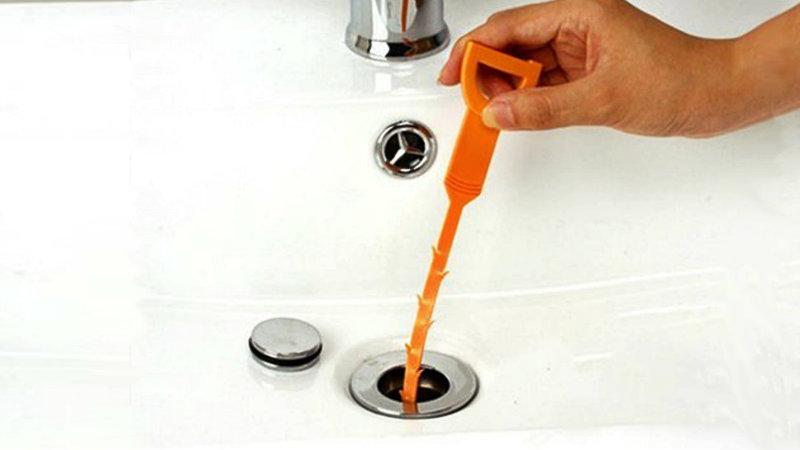 1. How you run your plumber’s snake depends on whether it is electric or manual. Start by removing your shower grate and any hair or debris on it.

2. Direct the cable into the drain opening, tightening the clamp and carefully rotating to help the snake auger itself down.

3. You may feel resistance when you reach the clog, and this shouldn't be too far down . Rotate the cable to break up the blockage.

4. At this stage you can run some water down to check whether it's cleared or not. If it has, bring up the snake and remove any debris attached to it. If not cleared, continue to guide the cable further down.

5. Finish off this process by running hot water down the drain to wash away the broken up debris and reattach the shower drain cover.

1. Unravel the hanger so it's straight, leaving the hook at the end.

2. Remove your drain cover and weave the hook side through and down the shower pipe.

3. You should feel when you get to a blockage – you can use a flashlight also to take a look – and when you get there, hook onto the hair etc. and pull gently to remove it. Keep going until it's clear, then flush out using the hot water method above.

4. How to unclog a shower drain with baking soda and vinegar

What about how to unclog a shower drain the traditional way? In fact, this method is still a go-to in many households as it works so darn well. Plus, it may have you reminiscing over your science fair baking soda volcano project too – an ideal distraction for not the most glamorous job!

How this works is the hero household ingredient, baking soda, will dissolve mineral and soap deposits which are gunky and clogging up the pipe. It will also help disinfect the area and eliminate odours from any fungi or lurking bacteria (likely).

The vinegar is what helps cause the pressurized reaction, but this only happens properly in a sealed environment. Which is why it's best to try cover the drain pipe while this mixture works.

1. Clear the drain of any hair and debris using the drain snake or coat hanger method.

2. Pour one teakettle full of just off the boil water down (carefully as this may splash).

3. Pour one cup baking soda followed by one cup of vinegar down the shower drain, cover and leave it for minimum 15 minutes, max an hour.

4. Flush through with more hot water to clear it completely.

You might want to try the recommendation of Vera Peterson, president of Molly Maid, too, who suggests, ‘Squirt some grease-fighting dish soap (helps to dissolve grease) into the drain,’ before adding the hot water.

5. How to unclog a shower drain without using a store-bought product

You might wonder how to clean a shower drain without resorting to a special cleaning product, such as Drano or similar. If so, you can use the above methods, or try using dish soap and hot water.

Again, depending on the extent of the blockage, you may need to repeat this method several times until the water runs freely. This is also a good way to finish off method two above, using a snake pipe or wire hanger.

1. Bring two litres/the max amount your teakettle will take to the boil.

2. Add in a few tablespoons of dish soap.

3. Pour this down your shower drain.

What can dissolve hair in a drain?

The hair we shed naturally is a major cause of shower drain clogs – and long hair especially can block them. As for dissolving it, ‘Baking soda and vinegar should help, if you want a safe concoction,’ says Jake Romano from John The Plumber.

But as with many household tasks, prevention is better than cure. ‘If possible, use shower strainers,’ he recommends. ‘Shower strainers are available at most hardware stores and they’re cheap. They'll catch most of your hair strands before they get stuck in the gunk in the drain. This alone will prevent most shower clogs.’

How do you unclog a shower drain naturally?

Can boiling water unclog a drain?

Boiling water can unclog a drain – or do some of the work. ‘Hot water can often melt soap residue and other particles in the drain, so it can help,’ says Jake Romano.

But beware! ‘If the water is too hot, it can cause damage to the pipes,’ he says. ‘Nothing beats a proper cleaning, in my opinion. Use those cheap snakes, and that’ll often get the job done.’

What is the best product to unclog a shower drain?

The best product to unclog a shower drain might not be the cleaner you first think of. ‘Chemical drain cleaners are something that many people turn to, but these usually only offer temporary relief if any,’ says Enoch Heise.

‘The reason is that as soon as the chemicals eat a path through the clog, water flow is restored and the chemicals drain out. There is still a bunch of gunk clinging to the sides of the pipe and it will clog again very quickly.’

But what you can invest in is a drain snake. ‘We recommend always using a mechanical drain cleaner that will really scrape the sides of the pipe, break up the buildup, and remove the hair,’ Enoch says. ‘You can readily buy small drain snake tools at the home improvement store that will do a great job for most shower clogs.’

These next-level shower drain de-clogging tools are worth grabbing for your cleaning cupboard.

A hero product in the world of natural cleaning.

A must for natural cleaning around the kitchen and beyond.