Dog owners are often branded as irresponsibly for not cleaning up their pup’s mess when out and about in public - however, part of the problem might be the lack of appropriate disposal bins.

According to new research from the team at dog-centric blogThe Dogs , as many as 69 per cent of pet owners struggle to find dog poo bins to dispose of excrement properly.

It’s so bad that a further 88 per cent - or, almost nine out of ten - said that they get their pup to do their business in their own garden at home, instead of when they are on walks.

The teamstated: “Our survey suggests that part of the problem is a lack of public bins.

“Almost three-quarters of our respondents said they struggled to find dog bins. And when you start looking at UK councils and bin disposal, the problem gets worse.

“Many councils are struggling with a lack of funding, causing essential services to be cut or reduced, so even if you do find a bin, there is a good chance it is already overflowing with rubbish and unable to take your steaming deposit.

They added: “It certainly isn’t a valid excuse; most dog owners will carry the used bag until they find a bin, or take it back home where they can conscientiously put it in their own black bin, but it does explain some of the bad behaviour. 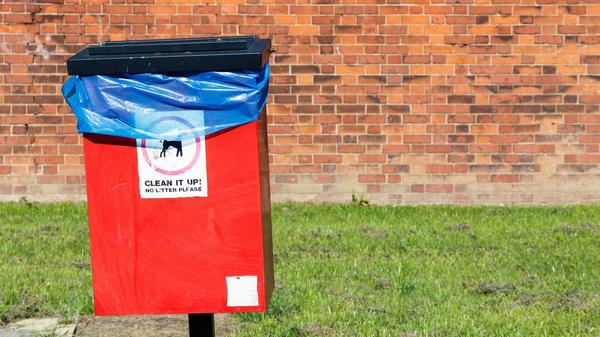 A further 88 per cent of survey respondents agreed that there was a dog poo disposal problem in the UK, with four in five (82 per cent) saying that it was not okay to leave dog poo in fields, parks or grass next to pathways.

Interestingly, though, 82 per cent also said they had spotted dog excrement in an ‘inappropriate place’ within the last month.

Dog owners who do not clean up dog mess in areas that are covered by Public Spaces Protection Orders can be given an on-the-spot fine of £80, or end up paying £1,000 if taken to the local Magistrates Court.

This law was introduced as part of the Anti-Social Behaviour, Crime and Policing Act 2014, and applies in England and Wales.

As for Scotland, it’s an offence under The Dog Fouling (Scotland) Act 2003 for a person in charge of a dog not to clean up after they’ve defecated in a public open space.

The maximum fine for the offence is £500.

The Dogs team’s postadded: “In a world where growing populations mean we share our outdoor spaces with more people than ever, this is worse than bad social etiquette – it is a crime that can lead to the spread of diseases and unwanted parasites.”

Dog parents were also warned against flushing their dog’s waste down the toilet.

That’s because it can contain Toxocara (roundworm) which is potentially able to survive the high temperatures and conditions that used water from toilets and sinks undergoes when it is treated.